There have been two responses to a letter of mine which appeared yesterday in the ‘Belfast Newsletter’. The letter was a synopsis of my article,  “Child abuse: Stormont ministers set March date for apology”.

One response is an article in today’s ‘Irish News’, written by one of its correspondents, Claire Simpson.

The other is a letter which appears in today’s ‘Belfast Newsletter’. It is from Margaret McGuckin, Denise Burke, Ron Graham and Alan Philips.

I have reproduced screenshots of both responses, sent by a kind friend, below.

In anticipation of just such a response, I had already penned an article and mounted it upon my ‘Burning Bush’ web page. The article is entitled, “A DEFENCE IN THE FACE OF AN EXPECTED ATTACK!”

I will briefly reply to both articles, beginning first of all with the following “Irish News” article. 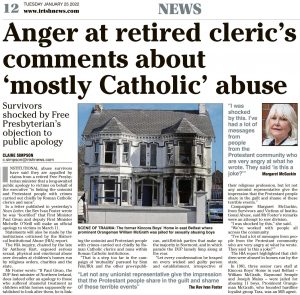 The article in the ‘Irish News’ is mostly composed of the text of my original letter to the ‘Belfast Newsletter’. I sincerely thanks Claire Simpson for reproducing my article and bringing its truth before many Roman Catholic readers I would otherwise be unable to reach!

The rest of the article is comprised of two items.

1. There is a response from Margaret McGuckin of ‘Survivors and Victims of Institutional Abuse”. It is more than a little surprising to have her retort: ‘I was shocked by this . . . It is a joke’.

I can assure Mrs McGuckin that what I said was no joke since the matter concerns one of the most grieving and vexing series of events in recent times.

What I find truly ‘shocking’ is that a Roman Catholic victim reacts as she does to an explanation of just why she and her fellow-victims should have been abused as they were in Roman Catholic institutions.

No organisation which has the history that the Church of Rome has and which has been subjected to international exposure in recent times of the most evil abuse of children in her care, by those of her clerics and nuns, would escape the harshest  censuring and public opprobrium.

Were it any other organisation it would be universally ostracised and outlawed. The fact that Rome is not thus dealt with is an acknowledgment of her kinship with this world and its ways!  Christ said : “‭My‭ kingdom‭ is‭‭ not‭ of‭ this‭ world,” John 18:36. That can in no way be said of Roman Catholicism!‬‬‬‬‬‬‬‬

Innumerable members of her clergy of all ranks, have been found guilty in the courts of many, many countries, not only of crimes against children but of denials, cover-ups and concealment of those crimes and then followed by the most insincere and sugary apologises when all attempts to hide the crimes had failed!

I make use of Paul’s words in Romans 9:1-2 to convey my own feelings on this matter.  “I say the truth in Christ, I lie not, my conscience also bearing me witness in the Holy Ghost, that I have great heaviness and continual sorrow in my heart” regarding the terrible evil suffered by Roman Catholic children. Nothing I have written was designed to add to their suffering but rather to urge them to see the source of the evil they endured.

The Roman Catholic Church is honoured and here in Ulster is fawned upon by so-called Protestant ministers to their shame and to the perpetuating of the deceitful myth that Romanism is a branch of the Church of Christ.

Nothing could be further from the truth! Who and what she is has been repeatedly set out in the historic creeds that stem from the Reformation. I have given a summary of such in my ‘Burning Bush’ article “A DEFENCE IN THE FACE OF AN EXPECTED ATTACK!”

What I say can be easily checked. Those creeds of Protestantism are the deeply held beliefs of our forefathers, who by the grace of God, were delivered from the darkness of Romanism and came to see that system in the light of God’s Word.

My sincere desire is that my Roman Catholic fellow country men and women, especially those who have suffered more than others at the hands of Rome, may come to that realisation also.

It is to be noted that Claire Simpson musters but three names from a Protestant background of those who were convicted of child abuse and rightly jailed. However, she makes no attempt to name any of the hundreds of Roman Catholic clerics and nuns who have been brought before courts here in Ireland!

Could it be that had she done so,  her article would have filled today’s edition of the “Irish News”?

I will now reply to the letter in today’s “Belfast Newsletter” which I have copied from that newspaper’s pages..

A letter Margaret McGuckin and other members of SAVIA (Survivors and Victims of Insitutional Abuse):

We, are the main SAVIA (Survivors and Victims of Insitutional Abuse) lobby group who represent a large cross-section of both Catholic and Protestant HIA (Historical Institutional Abuse) victims and survivors in Northern Ireland, the UK and abroad.

We are horrified at the contents of Ivan Foster’s letter to the editor in the News Letter on January 24 (‘Protestants should not say sorry for abuse in Catholic establishments,’ see link below).

We have been campaigning, Protestants and Catholics together, for justice for nigh-on 15 years and just recently have been given our long-awaited apology date and timeline.

We have felt vindicated, totally, and have decided to end our long and arduous campaign. This weekend we finally rested, happy and content that our fight for justice was over.

This was until we read the vitriolic and biased comments coming from a man of the church.

His comments have taken away some of the peace of tranquillity we had finally found after all these years.

Does Rev Foster not realise that the First and Deputy First Ministers Paul Givan and Michelle O’Neill will be acting as representatives only, and apologising on behalf of the state?

The state, that is, which assigned vulnerable children to both Protestant and Catholic religious-run institutions at Whiteabbey, Rathgael, Kincora, Palmerston House, as well as to state-run care homes.

Now, only because of our long campaign and the Hart Report findings, do we see that child abuse was taking place across the board, in the majority of institutions. In Sir Anthony Hart’s words abuse was ‘systemic, unreported and covered up by all’.

Hence the apology from the First and Deputy First Ministers on behalf of the state, alongside an apology from the Church of Ireland, the religious orders, Barnardos, Kincora, Palmerston etc.

We do hope Mr Foster will retract his statement. Perhaps he will reflect on the bonds of friendship our members have formed between ourselves, which is why this letter has been agreed between us.

My reply to the above letter.

I emphasis that I have absolute no desire to add to the already great sufferings of the victims of child abuse in institutions supposedly run for their welfare. Speaking the truth can never do that.

1. First of all, nothing can be said to contradict my statement that the vast majority of victims were from the Roman Catholic community and that it was within Roman Catholic-run institutions and under Roman Catholic clerics they suffered. In saying that I make no criticism whatever of the victims.

2. Stating this undeniable truth does not indicate “vitriolic and biased comments” on my part no matter who may make that unfounded and unproven allegation.

4. I find it more than sad to read the words: “His comments have taken away some of the peace of tranquillity we had finally found after all these years.”

Can it not it be seen that such ‘peace of tranquillity’ cannot be well founded if my stating of truths which all and sundry know to be so, if they would only have the courage to acknowledge it, take away some of it?

What peace can be found in blinding one’s self to the true character of the Roman Catholic Church and continuing on within its fold! No other institution, were it to be found as guilty of criminal activity as has the Church of Rome, would retain the trust and devotion of its former adherents nor would the betrayed react with vehemence against anyone who dared to repeat the sad catalogue of its evil.

Far be it from me to in any way minimise the suffering of the child victims within our God-denying society. I recall once having to tell one such victim to stop relating his sufferings to me as I just could not cope with such a horrific revelation. Therefore I have some faint understanding of what suffering this dreadful  occurrence has inflicted. But the sufferings of many in the days of the apostles was unto death and yet note the peace and joy that God by His grace bestowed upon them.