Separation or Integration – Which is God’s plan?

The Democratic Unionist Party, in its ongoing mutation from orthodox unionist party to the vanguard of the ecumenical thrust in Ulster, has become the champion of Integrated Education

…Sadly, indeed, tragically, the whole mish-mash of ecumenical deception has been embraced and endorsed by some Free Presbyterians, who, in utterly blind and stupid devotion to the DUP, have abandoned the Biblical principles undergirding Free Presbyterianism. Read more… 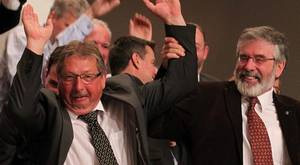 …or the cost of being in coalition with those you loathe !!

A picture Sammy Wilson of the DUP most likely would rather forget – Gerry Adams grabs his arm as they take part in a ‘Mexican wave’ while waiting for US President Barack Obama during his visit to the Waterfront Hall, Belfast ahead of the G8 Summit in County Fermanagh.

Liberty University is coming under fire following a recent essay released by a former student who shared his story of being a practicing homosexual on campus. Read more…

A popish octopus with a very long reach

To read the text of Rev. Foster’s closing comments in this broadcast, click here.

The “Impartial Reporter”, based in Enniskillen, Co. Fermanagh and dating back to 1825, is deemed a family newspaper. It breached that status in its 5th June 2013 edition when it used the words of a foul-mouthed drunken lout as its headline for an article on the incident in which the lout was being questioned by the police regarding drunken driving.

Anyone who has read the newspaper will know the article in question.

Rev Ivan Foster emailed Mr Denzil McDaniels, the Editor to complain about the offensive headline and has also lodged a complaint with the Press Complaints Commission. Here is the email he sent with the link to the article removed for the sake of decency. Read more…

The Renewal of the Near East

A Lecture given at Mildmay Conference Centre By B. W Newton, dating back to the mid-1850s (Reproduced from “Watching and Waiting” magazine, August 1937)

My object is to show that both these chapters (Isaiah 13 and 14) in their completeness have not yet been fulfilled! It is generally assumed that they have been; therefore, it is important to know the grounds for the assertion that they are unfulfilled. You will observe that in chapter 13, A City — Babylon — is chiefly considered. In chapter 14, A Person — Antichrist — the king of that City. Read more…

Jimmy Spratt apologises for Maze ‘nutters’ remark (after vehemently denying he made it!!??)

Hezbollah meets the IRA at the European Union

Would the real Sinn Fein please stand up?

What did Gerry Kelly think he was doing?

Board expected to vote for end of academic selection

Smiling and beautiful countryside of G8 summit hides dreadful record of sin – Fermanagh was the scene of some of the worst sectarian violence in the North.

Sammy Wilson should be ashamed of Gerry Adams antics

Adams doesn’t know if Disappeared will be found

Bomb victim ‘disgusted’ at Libyan PM decision not to meet

Ex-UUP chairman: why I no longer back the Maze plan

The Greeks who are turning back to worship their ancient gods

EU and US ‘in biggest trade deal’

Willie Frazer ‘was not at protest’

Willie Frazer freed again after being held over bail breach

Does this video tell the real truth concerning the UK’s crippling debt?? – (worth a look)

Anniversaries serve to highlight the IRA’s toll of terror

4,000 lives a year lost by poor hospital care at weekends

No protest events planned for the Irish Republic

Pope tells Archbishop of Canterbury to stand firm on traditional family values – (Archbishop says he “felt at home” in the Vatican!)

DUP Should Listen to Unionist Concerns Over Maze

An openly sodomite Alliance Party mayor has been appointed to North Down Borough Council for the first time.

Sinn Fein’s cultural war on unionists will only intensify

Why can’t we bring terror godfathers to account over foul crimes?

Memorial service held in Coleraine to mark 40th anniversary of car bomb – Six civilians all aged over 60, all Protestant, were killed

Jim Wells may not replace Poots as Health Minister

AND NOW FOR THE GOOD NEWS!! – Ireland will have no Catholic priests in twenty years predicts a senior cleric

Exclusive: UK is warned it is losing fight against modern slavery

Remove flag at Castle for good says Sinn Fein MLA (TRUE HEART OF SINN FEIN – If the flag is so hated by republicans just what are their feelings for the people of the flag – the Protestant population??)

DUP’s heir apparent after a flawless reign as mayor – (This only Liam Clarke’s opinion. God has yet to give His!)

A million children grow up without fathers, report warns (The disintegration of society which apostasy has brought)

New pro-union party launched in Belfast will be modern and inclusive, its leaders pledge (They might have added ‘a total flop” as well!!!)

Flag airbrushed out of G8 leaflet

Teacher with indecent images of children allowed to resume career

Church of England gives up fight against gay marriage

The reasons behind Marian Price’s release must be explained

Threat of terrorism in Northern Ireland ‘will last for years’

Bishops under pressure to abstain in gay marriage vote

US court rules McConville tapes must be handed over to PSNI

Iraq violence: May was deadliest month for years – UN