The New Golden Boys in the Military

Just when you think the Obama administration cannot possibly engage in any more stupid, embarrassing episodes, you suddenly discover that you are wrong. This administration’s capacity for insanity appears to be limitless. The latest example of this occurred on Tuesday when the Pentagon hosted something called the Second Annual Gay Appreciation Day. Read more…

Pope Francis’s performances and writings give a picture of a man that is two-faced. To build a public image for himself, Bergoglio, once elected, chose the name Pope Francis in honor of St Francis of Assisi. St Francis was known to be a softhearted lover of nature; thus, Pope Francis adroitly implied that he would be similarly unassuming, kind, and harmless. Then following his election, he paid his own hotel bill for his stay during the enclave. He then took up residence, not in the usual papal apartments, but rather in a smaller more humble suite. On the other hand, from his first speech and subsequent presentations, he has shown himself as a totalitarian dictator. Thus, as the media and many ecumenical Evangelicals fawn over Pope Francis, it is necessary to biblically analyze his speeches and performances. The mind boggling conclusions are documented in the attached article. Read more…

Will we never learn?

As one who has vivid memories of the Terence O’Neill campaign against Bible Protestantism in the early and mid-60s, I see much that is reminiscent of that time of betrayal, which was seeded by the foolish notions of the ecumenical church leaders back then. Read more…

When lightning flashes this is not what you want to see!

This picture, sent to me by my friend Ralph Ovadal, is a wonderful illustration of the great mercy of God to careless unthinking sinners.

This lightning flash is so like that flash of divine light which shows the sinner the danger he faces, the danger he was utterly unaware of until that light from heaven shone down and in a moment informed him of that which the witness of friends had been unable to get across. 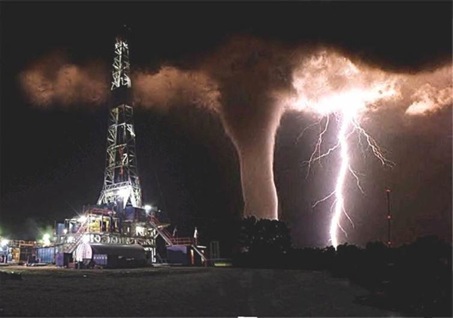 Refo500 to celebrate ‘The Catholic Reformation and its Lustre’!!

Joel Beeke is still linked with Refo500 and participating in events it organises. On His church page there is a promotion for: “THE LEGACY OF THE REFORMATION TOUR”, JULY 11 – 19, 2013. This is your invitation to be part of a truly transformational travel experience led by Dr. Joel R. Beeke and Dr. Jason P. Van Vliet!

That same tour is advertised here on the same site as the announcement of ‘The Catholic Reformation and its Lustre’. See it here.

“A Popish Octopus with a Very Long Reach”

The Transcript of a Heart of the Matter Documentary on Refo500. Read it here.

What a difference 25 years make!!!

The following article – “Stealing away our children” – was produced by the Presbytery Education Board and circulated amongst Free Presbyterians some 25 years ago. The government proposals it exposed were greatly stymied and resisted so that they never truly got off the ground as it was hoped, chiefly because they were opposed in the educational and political arena by Free Presbyterians loyal to the teaching of the Word of God. However, those very proposals form the bedrock of what it is that the Democratic Unionist Party has now embraced and which it would have Ulster Protestant parents adopt with open arms. Read more…

See a copy of the original article here.

“Elias Truly Shall First Come” (Matthew 17:11). Thus spake Immanuel, the Greatest of all the Prophets, reminding us of the certainty that Elijah shall come again to the earth before the Lord returns in glory. Few realise the wondrous fact that Elijah is coming in the weakness of the flesh, though with super-natural powers, to testify to the truth of thee Scriptures in the last days. The coming of Elijah is mentioned several times in the Scriptures. In Malachi we find the plain and clear statement that Elijah shall come before the Lord Jesus is revealed in judgment (Malachi 4:5). The disciples believed, though they did not then fully understand this Scripture. Therefore they were perplexed, and asked the Lord, in effect, “As Thou art the Christ, why has not Elijah first come?” They were not then able to distinguish clearly between the first and second comings of the Lord. Read more…

Security threat ‘severe’ as dissidents agitate for a kill

Is it necessary for a true Christian to have had a personal conversion experience? “Absolutely not” says tongues-speaking Archbishop of Canterbury

Another Protestant enclave comes under attack

No DUP writ to BBC, a month after broadcast

Pope says he will not judge priests for their sexual orientation

Pope Francis: Who am I to judge gay people?

Rampaging mob in west Belfast are ‘an affront to their community’

Hundreds step out to mark centenary of historic rally

Omagh depravity haunted suspect, Seamus McKenna – (A revelation of the true character of a Republican ‘hero’)

Thought for the week: Flying the flag of peace – (An example of the puerile, ecumenical drivel with which the Protestants of Ulster are bombarded!)

Archbishop of Canterbury: Church can invest in pornography and gambling

“You cannot find Jesus outside the Church,” says Pope (Same old popish lie peddled that has deceived and damned millions)

Petition calls for chaplains move at Antrim hospital to be scrapped

Republicans urged not to ‘flaunt hatred’ with anti-internment march

Another group comes out against Maze plan

Teenager hits out at Maze plan

Irish government vows to pursue religious orders for half the 1.46 billion euro cost of compensating their victims

Royal Baby: Flag flies at City Hall but not Stormont

Allister warns against Parades Commission ‘under a new name’

Unionism can learn from Sinn Fein

PSNI vows to hold the line again at parade flashpoint

No respect being shown to victims of terrorism

Willie Frazer: PSNI are stalling my trial to silence me

The Vatican Bank is rocked by scandal again

Nuns say they will not pay Magdalene compensation

William Frazer arrested, but why wasn’t it Gerry Kelly

Willie Frazer arrested at cafe for visiting Parliament Buildings, Stormont (No such “justice” for Gerry Kelly!)

Jim Allister statement on the arrest of William Frazer

DUP motion on Parades Commission decision carried – (Is not the DUP guilty of the same ‘crime’ as the Parades’ Commission – placating militant republicanism??)

Dying patients are suffering a “fundamental” lack of care, left in agony outside normal hours, according to a report which accuses nurses of brutality and callousness

MPs back singing and smiling lessons for parents of newborns – (just unbelievable!!)

Anger at media’s ‘blind eye’ over attacks on loyalists

Analysis: Orange Order damaged by lack of a plan

IRA leaders’ right to life was breached by UK, European court finds (More evidence that the lunatics are running the asylum!!)

Roman Catholics to seek forgiveness for their sins via social media

Financial scandals keep piling up for the Vatican’s money-men

Orange Order says police have questions to answer on riots

Female member of flute hospitalised after attack by republicans

David Ford warns loyalist rioters: ‘You will face court within hours’ (No such swift justice for IRA murderers!!)

Violence in Belfast is driven by the few who feel ignored

5,000 dissident republicans ‘due to march through Belfast’

Most children will be born out of wedlock by 2016

What has ‘honest’ DUP got to hide from us? – Letter

Nigel Dodds thrown out of Commons chamber over parades comment

Parades Commission ruling is a reward for violence, says Robinson (He was happy to see Sinn Fein so rewarded when he entered government with them!!!!)

Flagpole cut down at Orange Hall near Dungannon

UUP: Blame for deaths lies with the IRA bombers, not police

BBC: There is no DUP legal action against us

Monument unveiled to victim’s of the IRA’s Kingsmills massacre

“DUP have been hoodwinked by republicans” – UUP’s Tom Elliott

DUP accused of ‘chicanery’ after veto on inquiry into its minister

US Senator warns Boston Tapes could threaten NI peace – (In other words : ‘The price of peace is a licence to murder’!)

US Preacher Arrested in London for Calling Homosexuality a Sin

PSNI get tapes of IRA interviews over McConville case

Pressure on Adams grows as secret tapes handed to police

SF leader’s version of past is insulting nonsense

IRA ‘lied to Government on decommissioning’

Fear and loathing as marching season gets underway

EU referendum: MPs call for public to have their say

DUP Housing Executive whistleblower ‘too stressed to think’ amid row

Archbishop of Canterbury Welby calls for Church to join the sexual ‘revolution’ (God and His Word count for nothing!!)

Don’t use ‘gay’ as an insult or joke, says Michael Gove (It should be seen as a reference to a vile and damnable sin)

First Minister has said he does not know who to believe in the row over political interference in public housing contracts.

Nelson McCausland: No intention of standing down

McCausland: I and my advisor did nothing wrong on Red Sky

DUP councillor: I was tortured by what happened

Another victims’ group comes out against the Maze

Drugs: the poison that is polluting communities

McCausland and his Special Advisor must go

True toll of mass migration on UK life: Half of Britons suffer under strain placed on schools, police, NHS and housing

Nelson Mandela ‘was against IRA decommissioning’

Unionist leaders in war of words over Maze conflict centre

In sickness and in health? That’s too religious for a civil wedding

EU concern over Der Spiegel claim of US spying

New NSA leaks show how US is bugging its European allies