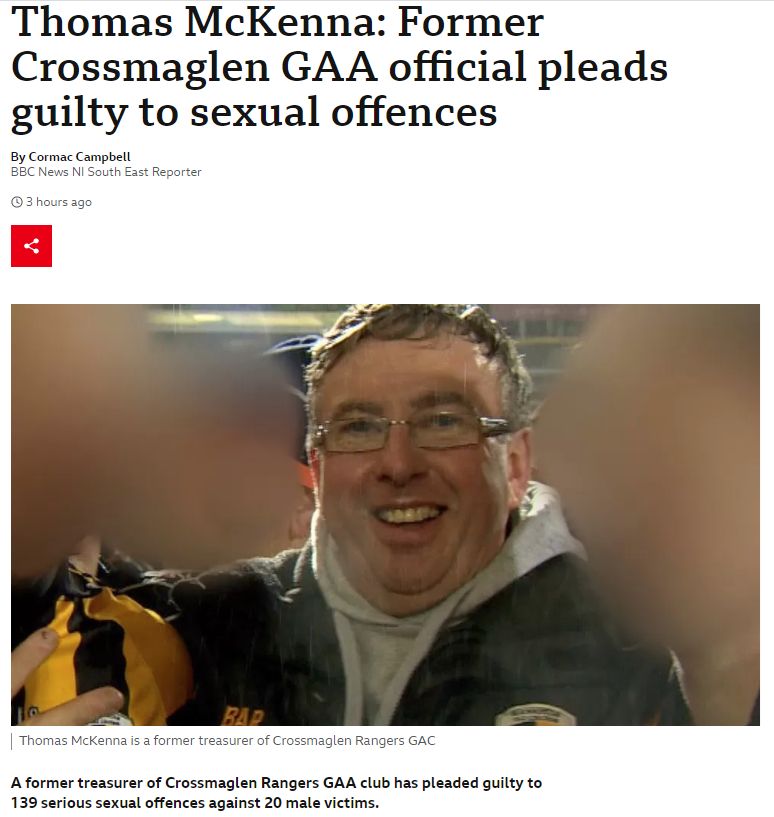 The following extracts from today’s news, of which I have copied only the essential details, are matters which surely ought to bring home to us the terrible ‘hurricane’ of iniquity breaking forth amongst us.

The reports clearly indicate that this wickedness, while in many cases only coming to public attention now, has been an undercurrent in our society for decades.

This indicates the declining influence of true Christianity amongst us. The ‘Ecumenical’ variety has no power to hinder such evil, rather it is busy endorsing it! The liberal churches have embraced the stratagem of the LGBT+ perverts and sanctioned relationships for which people were condemned to jail in living memory.

Such is deemed ‘progress’ and ‘liberation’ but it is not. It is society sinking down into the morass of Hell’s depravity.

Children and young people need the protection that only Bible-based institutions can give. Churches governed by those laws set down by God in His Word; Children and Young People’s meetings which are designed not to entertain but to instruct in the eternal verities; Schools which follow only a curriculum formulated from the Word of God and which employ only those who bear strong Christians testimonies and such schools should be under the governorship of godly men and women.

Above all, the homes of our land should conform to that standard of behaviour and environment which God requires.

“Nevertheless let every one of you in particular so love his wife even as himself; and the wife see that she reverence her husband.

Children, obey your parents in the Lord: for this is right. Honour thy father and mother; (which is the first commandment with promise;) That it may be well with thee, and thou mayest live long on the earth.

And, ye fathers, provoke not your children to wrath: but bring them up in the nurture and admonition of the Lord,” Ephesians 5:33-6:4.

Without a return to these standards, society will continue to degenerate, ever more speedily, and there is formed around us that atmosphere and spiritual climate which shall give rise to full-blown Antichristianity, which in turn will bring down God’s judgment for “because of these things cometh the wrath of God upon the children (offspring) of disobedience,” Ephesians 5:6.

The former postman was placed on the sex offenders register as a result of the guilty pleas.

A former treasurer of Crossmaglen Rangers GAA club today pleaded guilty to a litany of sex crimes against young boys dating back over three decades.

Ex-post man Thomas McKenna, 62, formerly of Woodside Park, Bessbrook, Co Armagh, was due to go on trial next week on the first of three sets of charges he faced.

But at Belfast Crown Court on Thursday, defence counsel Kevin Magill asked for McKenna to be re-arraigned on three separate charge sheets which totalled 148 sexual offences and related to over 20 victims.

McKenna, who was produced to the court from Maghaberry Prison, pleaded guilty to a catalogue of offences which included multiple counts of indecent assaults, sexual assaults and gross indecency offences on young males on dates between 1989 and 2018.

A Church of Ireland minister in east Belfast transferred to a rural parish in the Republic after child sex abuse allegations were made about him in the 1970s, a BBC investigation has found.

Billy Neely was also a scout leader and was banned from the organisation after he moved to Tipperary in 1976.

Canon Jonathan Barry said complaints were made to a bishop and believes the move was connected to the allegations.

The Church of Ireland said it could not comment because of legal proceedings.

Canon Billy Neely served in Mount Merrion parish on the edge of the Cregagh estate for a decade before his move to Kilcooley Parish in Tipperary.

As well as his clerical duties at Mount Merrion he led a scout troop in the local hall.

He was considered a high flyer in the church, promoted to canon at a relatively young age.

But Jonathan Barry, then a young minister at a neighbouring Church of Ireland parish, said he received disturbing allegations about Billy Neely in late 1975.

“There was a funeral that morning in St Mark’s, Dundela,” he recalled.

“Two ladies took me to one side and spoke to me, making an allegation about Billy Neely in Mount Merrion, their rector.

“It was a mother and a grandmother and they made specific allegations concerning the way he was behaving in general, but in particular towards their son and grandson; that he was beating small boys for sexual gratification.”

A parish minister has been accused of abusing his position to steal over £10,000 from the church and a hospital grouping.

At Lisburn Magistrates Court on Thursday, 48-year-old Reverend Adrian McLaughlin was charged with six counts of fraud by abuse of position.

Defence solicitor Garrett Greene revealed that while the father-of-two is still being paid £637 a week, “he is on gardening leave”.

Rev McLaughlin, with an address at Church Avenue in Dunmurry, faces six charges of fraud by abusing his position – five relating to St Coleman’s Parish Church and one relating to his role with the RVH Liver Group on various dates between 15 October 2016 and 1 October 2018.

While the prosecution did not open any of the alleged facts of the case, the particulars of the offences accuse Rev McLaughlin of: writing out a £10,000 cheque to himself, taking a £1,000 donation for himself; taking £520 from two complainants who had made donations and one who paid to use the church hall.

He is also accused of pocketing donations from a funeral held at the church but intended to go to RVH Liver Unit Group at a time he was a trustee of that group.

The case against Rev McLaughlin had been scheduled to be elevated to the Crown Court but Mr Greene asked District Judge Rosie Watters to adjourn the case for two weeks as “there are some matters outstanding in the papers” – submitting that legal aid should be granted because “these matters are particularly complex and there’s a risk to his livelihood” if convicted.