The following report has appeared in ‘The Belfast Telegraph’ today. The scan below was sent to me this morning by a friend. 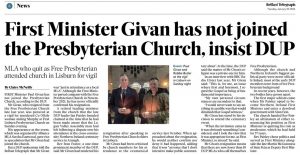 The headlines tell us that DUP First Minister, Paul Given, has not joined the Presbyterian Church but the picture tells us that he has adopted the Popish practice of lighting a candle for the dead!

Let me state here that we consider the murder of the young school teacher in Co Offaly, in the Republic of Ireland, as a most dreadful crime. We have every sympathy with her mother and father and the whole family circle in their unspeakable grief at the loss of a beautiful daughter just beginning her life, as it were.

While entering into their grief as best we can we will not adopt what is offensive to God’s by way of expressing our sorrow.

“Christians adopted the use of lit candles for Mass, liturgical processions, evening prayer ceremonies, funeral processions, and to show reverence to the Blessed Sacrament. It is also likely that candles or oil lamps were burned at the tombs of the saints, particularly martyrs. 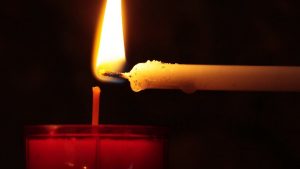 In the Catholic church, light has always had a special significance because it represents Christ. We know that Jesus called himself the light of the world. Additionally, St. John’s Gospel connects Christ with the imagery of light in John 1:4: “In him was life; and the life was the light of men.”

In our churches today, we light candles before a statue or sacred image of our Lord or a saint. The light signifies our prayer, which is offered in faith, entering the light of God. It also shows reverence and our desire to remain present in prayer even as we continue on our day.

Burning votive candles are a common sight in most Catholic churches. These candles are seen as an offering that indicates we are seeking some favour from the Lord or the saint before which the votive is placed. Vigil lights are another type of candles burned, and these are typically accompanied by prayers of attention or waiting.

Lighting a candle for someone is a way to both extend your prayers and show solidarity with the person the prayer is being made on behalf of. The faithful also light candles as a sign of gratitude to God for answered prayers.”

That adequately informs us of what is meant by the custom of Roman Catholics lighting candles at vigils etc.

The Lord explicitly commanded His people, “‭Thus saith the LORD, Learn not the way of the heathen,” Jeremiah 10:2. It can be seen from the explanation above that the practice of lighting candles at vigils etc is a heathen practice which has no precedent in the Word of God.‬

Poor Paul Given is an example of what happens to any Christian who drifts from God and His Word and conforms to the way of the ungodly in order to gain their esteem and support. He is but displaying the spirit that has been adopted by other professing Christians within the ranks of the DUP ever since it embraced power-sharing with Sinn Fein/IRA in order to gain political support and approval! Since that day in 2007 there has been a steady straying further and further from the truth of God and the path of obedience. Support and endorsement of sodomy and its allied perversions have been seen on repeated occasions in the intervening fifteen years!

Paul Given recently supported an ecumenical service in Armagh Church of Ireland cathedral. That led to his severing his links to the Free Presbyterian Church to which he had belonged, rather than submit to the strictures his attendance at that service would have brought upon him.

Now we have the DUP First Minister identifying with what is a heathen practice which denotes ‘prayers for the dead’!

The path of disobedience only leads downward.