It is important never to forget the wickedness of those now in power in Stormont who achieve that ‘elevation’ via murder and terror and the sad and sickening betrayal by the DUP of every democratic principle when they entered a power-sharing arrangement with Sinn Fein/IRA back in 2007.

It seems very likely that as a result of that treachery by the DUP, Sinn Fein/IRA may become the largest party at Stormont following the next Assembly election and thus claim the position of ‘First Minister’!

One of the atrocities that brought Sinn Fein/IRA to power was the massacre of eight workmen at Teebane Cross on the Omagh/Cookstown Road, as they journey home in 1992. The reason for their murder? They were carrying out repair work in Lisanelly British Army base in Omagh!

For that they were slaughtered by the murdering fiends of the IRA.

Sincerely in the cause of truth,

A service took place yesterday to remember the eight men killed by the IRA at Teebane, near Cookstown, in 1992. 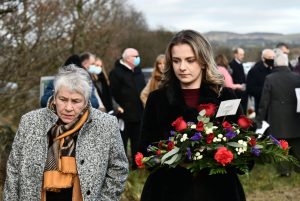 Family and Friends during a 30th Anniversary service of the Teebane bombing outside Cooktown in Co Tyrone on Sunday. Eight Protestant workmen died in January 1992 when the IRA blew up their minibus at Teebane crossroads, on the road between Omagh and Cookstown. Another six were injured.

One of those who attended the service was TUV leader Jim Allister.

He said afterwards: “This afternoon I had the privilege of attending a roadside service to remember the victims of the IRA’s Teebane massacre when eight Protestants were murdered while travelling home a lonely country road after an honest day’s work.

“It was one of the most infamous atrocities committed by the IRA. Even by Republicanism’s depraved standards the killing of men while they were returning from their employment stands out as particularly horrendous. 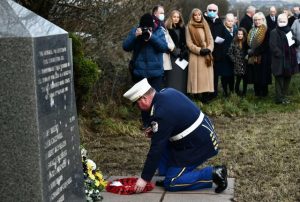 “Three decades on it remains the case that no one has ever been charged in relation to this massacre.

“In stark contrast to other cases, there is no prospect of a Police Ombudsman’s report or even significant media interest in the suffering of the families.

“However, their dignity and determination to remember their loved ones demands respect and the shocking failure to hold the murderers to account still demands action.

“I am very grateful to have been afforded the opportunity to attend today’s event and commend the organisers for ensuring that the events of that horrific day are not forgotten.” 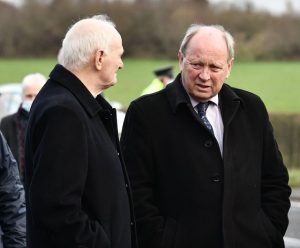 Rev William McCrea, who spoke at a service at the roadside and Jim Allister during a 30th Anniversary service of the Teebane bombing