I was sent the following article and would wish to make one observation based upon one criticism of the rugby players who refused to wear these ‘pro-sodomy’ jerseys.

I have in the past stated that it is wrong for a Christian to turn out for any sports team which is supported by the booze and betting trades. However, bad and all as this is, it falls short of donning regalia which openly supports the ever-spreading abomination of sodomy! God certainly draws a distinction between sodomy and all other sins. I believe that it will receive the severest of all punishments on the day of eternal retribution, with the exception of the sin of rejecting the gospel of Christ.

The destruction visited upon those cities, surpassing all other manifestations of God’s wrath, is meant to be an example, a pattern, of the vengeance awaiting those guilty of this wickedness.

This BBC article contains the following statement: “What infuriates me (and always has) is that players will boycott over a rainbow but never boycott a teammate if he’s been accused of violence against women or any other morally reprehensible behaviour that they would all agree they don’t condone,” wrote Pam Whaley on Twitter.

This is not comparing like with like. Someone ‘accused’ of violence is not necessarily guilty of that crime and must be deemed innocent until PROVED guilty. But what the players were asked to do in this instance was to DISPLAY SUPPORT for a perverted lifestyle which is a violation of God’s Holy Law. That is entirely different from playing alongside a man who is accused but not found guilty of violence against women.

I would like to believe that the seven men featured in this story would indeed refuse to play alongside one CONVICTED by due process of such a crime.

This ‘Pam Whaley’ makes a comment which is in keeping with the perversion she supports. Those who reject God’s Law are always ready to try and justify what they do by resorting to untruths. 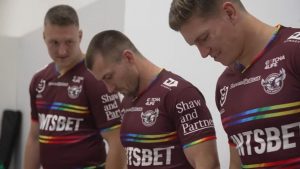 Seven players in Australia’s National Rugby League (NRL) will boycott a key match over their team’s decision to wear a gay pride jersey.

On Thursday, the Manly Warringah Sea Eagles will become the first team in the competition ever to don a kit which promotes LGBT inclusivity in the sport.

But players weren’t consulted and some object to the move on religious and cultural grounds.

The club apologised for its handling of the situation.

Coach Des Hasler said the club had made a “significant mistake” that had caused “confusion, discomfort and pain for many people, in particular those groups whose human rights we were in fact attempting to support”.

In a press conference on Tuesday, he apologised to the LGBT community and to the players involved.

“They were not included in any of the discussions, and at a minimum, they should have been consulted,” Hasler said.

Thursday’s game is considered important to the club’s chances of making the NRL finals and the players’ stance has sparked a backlash online.

“What infuriates me (and always has) is that players will boycott over a rainbow but never boycott a teammate if he’s been accused of violence against women or any other morally reprehensible behaviour that they would all agree they don’t condone,” wrote Pam Whaley on Twitter.

Others accused the seven of hypocrisy, pointing out the team is sponsored by a brewery and betting agency.

Hasler said he respected the men’s decisions and is concerned for their welfare amid the backlash.

In a column for the Sydney Morning Herald he implored the seven players to reconsider their position.

“Can you not understand the pain visited upon gay people who, no matter what they do, are disrespected simply for being gay?” he wrote.

Prime Minister Anthony Albanese praised Manly for its stance, saying: “It’s important in Australian society that we respect everyone for who they are.”

It isn’t the first time an Australian athlete has objected to wearing a pride jersey. Last year AFL Women’s player Haneen Zreika missed a game after declining to don the jersey on religious grounds.

Few Australian sport stars have come out. Mr Roberts and others say homophobia remains a big issue among fans and players in the country’s top competitions.

Adelaide United footballer Josh Cavallo – who came out in October – has called out the abuse directed at him by crowds over his sexuality.

In 2015 Israel Folau – who has played rugby league, rugby union and Australian Rules football at the highest levels – was controversially sacked by Rugby Australia for making anti-gay posts on social media.