Thoughts arising from my reading of this chapter as part of my daily reading and which are the third section of a brief study of Mathew 24:1-31.

I hope to continue the study on a weekly basis. 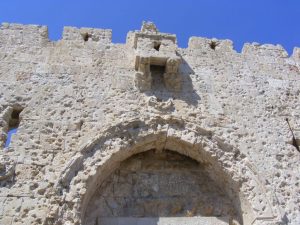 The bullet-scared Jaffa Gate, the result of the battle for Jerusalem when it was reunified by the Israeli army in the ‘Six-Day War in 1967.

In our last study we considered how that ‘the beginning of sorrows’ would lead on to the full harvest of sorrow and that it would be the Jews in Jerusalem who would chiefly suffer in that time of the ‘great tribulation’ at the end of this age, just before the Saviour returns in glory.

1. The Saviour makes clear in verses 9-14 just how the ‘sorrows’ will commence and what it will entail in its early stages.

The gospel will not be welcomed amongst the nations. History has testified to the truth of this statement. The word ‘‭‭‭‭‭‭‭‭afflicted‬‬‬‬‬‬‬‬’ refers to a ‘squeezing together under pressure’. This a very elucidatory setting forth of the persecution that would come upon the people of God. The ‘wine press’ has ever illustrated the troubles that come on God’s people. The Lord uses that instrument as a picture of His crushing wrath against sinners. “‭And‭ the angel‭ thrust in‭‭ his‭ sickle‭ into‭ the earth‭, and‭ gathered‭‭ the vine‭ of the earth‭, and‭ cast‭‭ ‭it‭ into‭ the great‭ winepress‭ of the wrath‭ of God‭,‭”‬‬‬‬‬‬‬‬‬‬‬‬‬‬‬‬‬‬‬‬‬‬‬‬‬ Revelation 14:19. In like fashion, the world directs its rage in an attempt to crush the life out of the witness of the gospel. There is no room in this world, as far as man is concerned, for the message of God!

Is that not all too evident today? The increasing lawlessness within society is paralleled by a decline in the passion and devotion of Christians to the truth of God. Do we not see in public life an abandoning of an allegiance to God’s Word and a going along with the ways of the world. This is particularly evident amongst politicians who within recent days have turned from such slogans as ‘The Truth shall set you free’, once the slogan of the Democratic Unionist Party, to an embracing of just about anything which they vainly believe will gain them votes, no matter how abhorrent to God such things that they embrace may be! 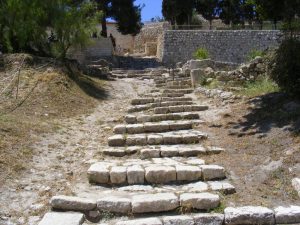 An ancient stone stairway which the Saviour likely used as he would have gone down from the city of Jerusalem across the Kidron Valley to the Mount of Olives.

In Ulster, we can trace very clearly the corrupting impact of the rising up within the pulpits of the Church of Ireland, the Presbyterian and the Methodist churches of men who openly abandoned the Word of God as their ‘rule of faith and practice’ and clung instead to fabrications and fancies of blinded men.

From such pulpits there flowed out a foul stream of lies which quickly poisoned hearts and homes of a land once renowned for its allegiance to the gospel. It is almost 75 years since the World Council of Churches came into being and the three main denominations here in Northern Ireland became foundation members of this axis of evil. While ‭‭the mystery‭ of iniquity‭” ‬‬‬‬(2 Thessalonians 2:7) was already working within the ranks of these denominations and there had been very clear evidence of apostasy amongst them, from 1948 that apostasy accelerated until today women ministers, sodomites, the Lesbian, Gay, Bisexual, and Transgender movement (LGBTQ+) and same sex marriage are promoted and embraced and flaunted within the ranks of these denominations.

Such a state of affairs marks the near zenith of the apostasy and marks its ripeness for God’s judgment, as was the case with the earth in Noah’s day and in the rebellion in the cities of Sodom and Gomorrah in Lot’s day.

The ungodly man, Pilate, tried to persuade the people to release the Saviour. “‭And‭ the governor‭ said‭‭, Why‭, what‭ evil‭ hath he done‭‭? But‭ they cried out‭‭ the more‭, saying‭‭, Let him be crucified‭‭.‭”‬‬‬‬‬‬‬‬‬‬‬‬‬‬‬‬‬‬‬ The blinded multitude would not listen. So it has been here in Ulster. For over 75 years a witness against the deceptions and lies of the modernist preachers has been raised, but very few have heeded that witness of God’s truth. The guilt of this dreadful folly rests upon this generation and like the Jews of old, a terrible price will be paid for the rejection of Christ and His testimony.

The ‘affliction’ and its resultant terrors, will not stop God’s Word being preached. As the age began so, it would appear, it will end. Remember the prayer offered by the persecuted band of believers in Jerusalem shortly after Pentecost?

The Lord will show His power by maintaining the preaching of the gospel even in the face of the fiercest of opposition, just as was the case in those early days of this gospel age. I have often felt that the parable with which chapter 25 of Matthew’s Gospel begins, illustrates that return to first century Christianity in the last days.

The trimming of the lamps by the ‘wise virgins’ indicates a turning away from their slumbering and sleeping, verse 5, and a returning to their duties of holding aloft the lamps they had left off in their carelessness.

How we should pray for such in these days of great slumbering and sleeping amongst the ranks of the people of God.