The sad testimony of the publishing of the 2021 census appears to show a Free Presbyterian Church of Ulster in decline! Its numbers are down some 29.15% from just twenty years ago! The trends of those twenty years need to be examined. 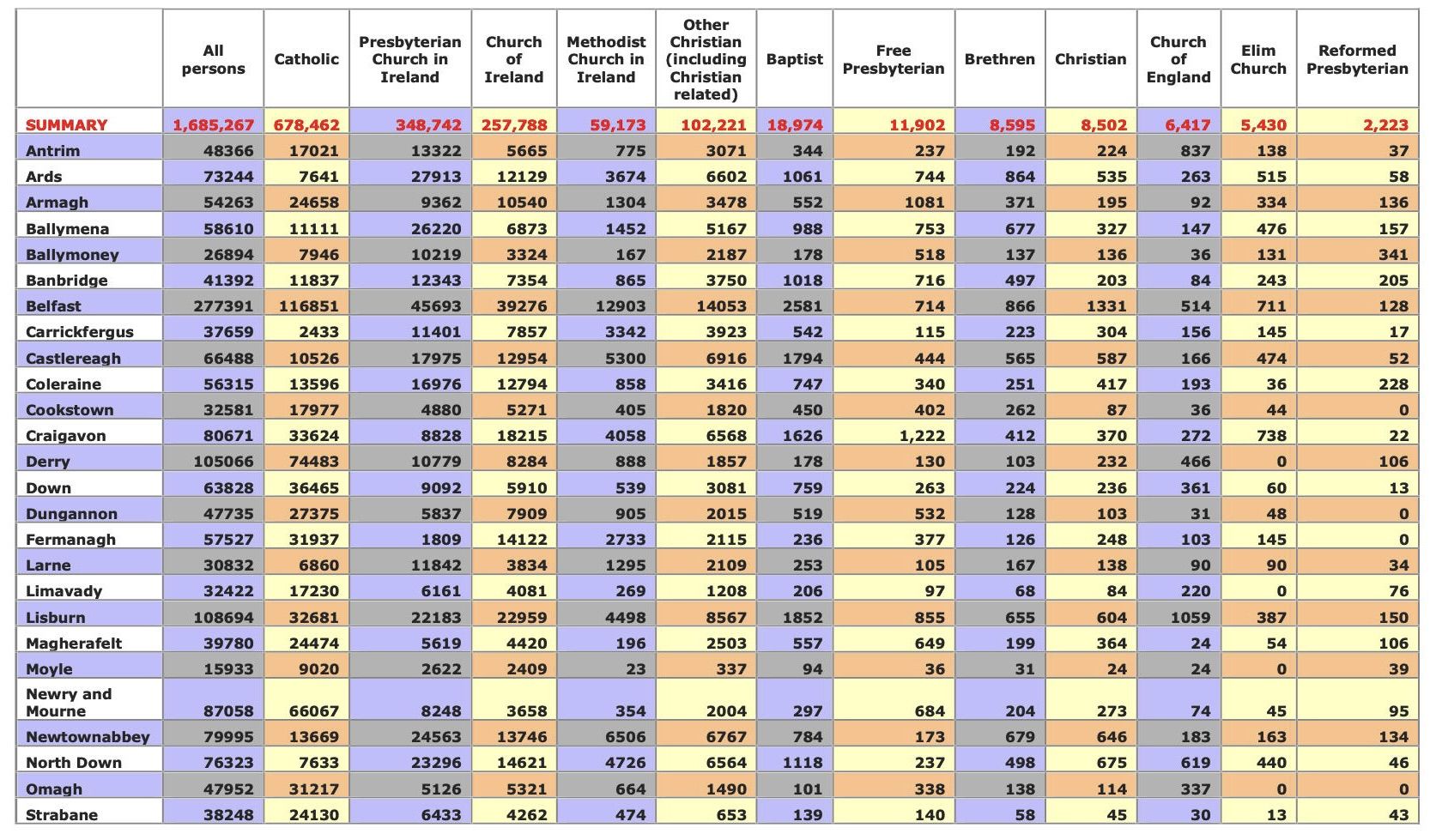 While the 2001 Census recorded 11,902 registered as Free Presbyterian, the recent Census states that this number was down to 8,433.

Question for us all

That poses a serious question for every Free Presbyterian, especially the ministers and elders of the flock over which the Holy Ghost hath made them overseers.

The question is: ‘Why is there such a decline?”

Increase and expansion is what the people of God may expect when theirs ways please the Lord. So it was in the early Church, as Acts 2:47 shows: “And the Lord added to the church daily such as should be saved.”

There certainly was a time when something of what is stated here of the early church was known and experienced by us. It is not so now and the census sadly makes that abundantly clear.

This decline is something that many believers have observed and a few have dared to speak of.

WHAT or better, WHO caused the increase in our numbers in the 1960s and 1970s and spread the witness of the Free Presbyterian Church wonderfully? Was it not the Lord Who was pleased to bless the separated witness that He had brought into being in 1951?

Why then is there now this decline?

Surely it is because we are no longer of the mind of the body of people whose ways pleased the Lord some 50 years ago and which enjoyed His blessing as a consequence!

Back then we were ‘unashamedly’ at war with ‘worldliness, sin, modernism, popery and ecumenism’. We stood unashamedly outside the camp of this latter-day apostasy and defiantly protested against the religious and moral decline. That is not true to the same extent today!

A policy of ‘compromise’ and an apparent desire to ‘avoid’ any words or actions which might offend the opinions of the general public and the ‘opinion-makers’ abroad. We pick and chose what we are ‘opposed’ to, often ignoring the sin and backsliding within our own membership

Whether or not such a policy pleases the Lord seems never to have been seriously considered. Rather, those who would pursue the ‘old paths’ and speak and act as was the norm 50 years ago are muttered against and ridiculed behind their backs!

The spirit and witness of the times of blessing in the past are deemed unsuited by those who have come to influence within the Free Presbyterian Church. That has been increasingly so. It was especially seen in the period in 2007 when Dr Paisley left the path he had followed for over fifty years and reasoned that a political uniting with Sinn Fein was acceptable and good and leading Free Presbyterian ministers supported him in this disastrous move.

The support by influential ministers for this folly was so strong that efforts were made in Presbytery to stop me speaking on the issue when I simply wished to urge Dr Paisley to consider either stepping down as Moderator or refusing the post of First Minister in the Power-Sharing Executive in Stormont rather than seeking to hold on to both posts and thereby involving the Free Presbyterian Church in all the decisions that would emerge from the DUP-Sinn Fein/IRA political amalgam.

When a proposal was made to stop me proposing such a motion, I only obtained the right to speak by a vote in my favour which out numbered those against me speaking by ONE VOTE!

That is how bad was the split the issue caused within the Free Presbyterian Church.

How dreadful was the division that entered a denomination once utterly dedicated to ‘all that Christ is for, and against all that Christ is against’, as it publicly declared in 1988 by each member signing a special Covenant. 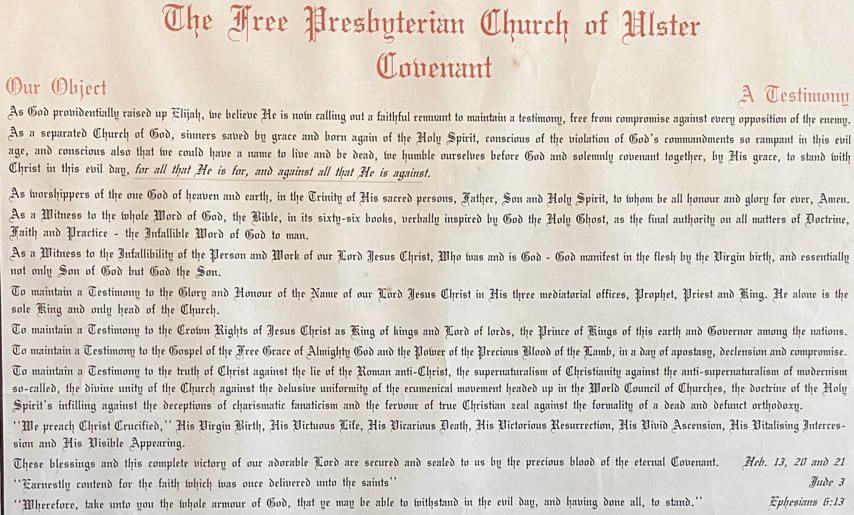 The solemn wording of the Covenant into which the Free Presbyterian Church entered with the Lord in 1988, whereby it promised to Stand with Christ in this evil day, for all that He is for, and against all that He is against.

That Christ was not for the ‘power-sharing arrangement’ with Sinn Fein/IRA was clearly seen in that Dr Paisley was out of the position of Moderator of the Free Presbyterian Church of which he was the pioneer, in January 2008, out of the office of First Minister within some ten months after his much celebrated inauguration, out of the leadership of the DUP, which he had founded in the early 70s, and shortly after, out of the pastorate of Martyrs Memorial congregation in 2011.

This is not what one would have expected to happen, had the Lord been in this 2007 decision by Dr Paisley. Nor is it how those who loved him and honoured the stand he took in earlier years and who benefitted much from his ministry, would have desired his days to end.

These facts bring us no pleasure but rather, we lament on every remembrance of those sad days, some 15 years ago.

I believe that what brought about this decision by Dr Paisley and the spirit of support for such a move amongst some minsters, elders and church members, cost the church generally the measure of God’s blessing that had been our privilege to enjoy over previous years.

As a result of the Free Presbyterian links with the DUP’s abandonment of the moral standards which were once a firm part of its policies, the Lord has been grieved and vexed and withdrawn in a noticeable measure. His power and blessing is not amongst us as in former times.

The DUP has endorsed sodomy, ecumenism, marital immorality and a degree of worldliness which it once stood against. This about turn in defiance of God has been supported by Free Presbyterians, whether in a most definite, public  manner or simply by their silent acquiesced in following the path taken by the party to which they remain loyal.

I do believe that there has been a measure of awakening to the wrong that the entering into power-sharing with Sinn Fein/IRA entailed. I have heard from various Christians of their change of heart. Sadly, I have never heard any such acknowledgement from those who took a leading part in encouraging Dr Paisley in his disastrous decision.

What are we to do?

I think we MUST follow the example of Nehemiah when he was informed of the sad state of Jerusalem and the people of God there.

“And it came to pass, when I heard these words, that I sat down and wept, and mourned certain days, and fasted, and prayed before the God of heaven, and said, I beseech thee, O LORD God of heaven, the great and terrible God, that keepeth covenant and mercy for them that love him and observe his commandments: let thine ear now be attentive, and thine eyes open, that thou mayest hear the prayer of thy servant, which I pray before thee now, day and night, for the children of Israel thy servants, and confess the sins of the children of Israel, which we have sinned against thee: both I and my father’s house have sinned. We have dealt very corruptly against thee, and have not kept the commandments, nor the statutes, nor the judgments, which thou commandedst thy servant Moses. Remember, I beseech thee, the word that thou commandedst thy servant Moses, saying, If ye transgress, I will scatter you abroad among the nations: But if ye turn unto me, and keep my commandments, and do them; though there were of you cast out unto the uttermost part of the heaven, yet will I gather them from thence, and will bring them unto the place that I have chosen to set my name there. Now these are thy servants and thy people, whom thou hast redeemed by thy great power, and by thy strong hand. O Lord, I beseech thee, let now thine ear be attentive to the prayer of thy servant, and to the prayer of thy servants, who desire to fear thy name: and prosper, I pray thee, thy servant this day, and grant him mercy in the sight of this man. For I was the king’s cupbearer,” Nehemiah 1:4-11.

Here is CONTRITION over the sins committed, CONFESSION of the forsaking of the Lord and His commandments and a earnest CALL for the Lord to remember His promises of old.

That is what the shocking disclosure within this census regarding the decline within the Free Presbyterian Church should produce in the hearts of God’s people.

May the members of Presbytery give a godly lead to the people in this matter, as did Nehemiah in his day.