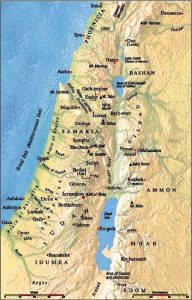 On Lord’s Day 20th March, 2022, Mr Matthew Eccles, a licentiate minister of the Free Presbyterian Church, was the preacher at the services in Kilskeery church. In the morning service, he took as his text Genesis 15:8. “‭And he said‭‭, Lord‭ GOD‭, whereby‭ shall I know‭‭ that I shall inherit it‭‭?‭” This was the request of Abram of God following the giving of a most wonderful promise to him.‬‬‬‬‬‬‬‬‬‬‬

Mr Eccles preached a very encouraging and instructive message from his text on how we need confirmation of God’s covenant and where such confirmations and endorsements are to be found.‬‬‬‬‬‬‬‬‬‬‬

When he turned the congregation to his text in Genesis 15, I noted that I had the numbers 4, 5, 6 written in the margin of chapter 15 and encircled. They were beside the verses 5, 7 and 18.

Following the service, when I returned home I traced the other numbers, one through to four and also number seven, which was in the margin of chapter 17, and saw that all the verses are linked to the clear promise of God to Abram, later called Abraham, and to his descendants.

I am going to list the verses I had so marked for your consideration.

The words in these verses, which may be found repeated to the people of Israel on many subsequent occasions, settle for ever the question of the ownership of the land referred to, Canaan, later known as the land of Israel. God has given the title deed of this land to his ancient people the Jews. There are many who dispute this fact, the Muslim nations surrounding Israel in particular. Where there has been a knowledge of the Word of God, you find there a sympathy with the Jews’ claim to the land. I refer to the United Kingdom and the United States in particular.

May I just suggest some reasons why this wonderful truth is thus repeated.

I. THE LORD REPEATS THIS PROMISE BECAUSE IT IS A THING OF JOY TO HIM.

We are familiar with the practice of taking out a particular object which is precious to us from a place of safety where we store it and looking at it with renewed pleasure. We delight to have a visit from one we delight in and whose countenance we look upon with joy and love. I am sure that we all have a spot, a landscape which we love to visit for it brings great pleasure to us to view it again.

Well, for a reason similar to that which causes us to so gladly look again upon that which we cherish, the Lord so delights in this wonderful purpose which He has decreed for His beloved people, that He obtains pleasure in repeating His objective for Israel, not only for their comfort and encouragement but for His own delight.

He was right in saying that an evidence of the Lord’s delight in Israel would be His bringing of them into the promised land.‬‬‬‬‬‬‬‬‬‬‬‬‬‬‬

The fulness of that delight lies in the future. At best, Israel’s occupancy of the land has been but for brief periods, all of which were beset by threats of removal and dispersion. Indeed, not since AD 70 until 1948 did Israel have as much as a toehold in the land of promise. Even now, its occupation is constantly under threat. But a day of coming when the nation of Israel will occupy all the land within the borders set down by the Lord and their security within those borders will be divinely secured.

Thus the Lord delights in repeating what it is He is going to do for His ancient people.

How sad that such statements of glorious intent should be ignored, twisted and misapplied, mocked and rejected as is the case today, even within the professing church!

Let me suggest another reason why the Lord repeats this wonderful promise.

II. THE LORD REPEATS THIS PROMISE FOR THE SAKE OF THOSE IT SPECIFICALLY REFERS TO.

It is ‭‭‭‭‭‭‭Unto the ‘seed‬‬‬‬‬‬‬’ of Abraham. This is particularised more clearly in other Scriptures. Abraham had many offspring but the promise of God applied to his son Isaac ONLY and more specifically, to his son JACOB and his twelve sons. The Lord had told Abraham specifically, “‭ . . . . ‭‭‭‭‭‭‭‭‭‭‭‭‭‭‭in Isaac‭ shall thy seed‭ be called‭‭,‭” Genesis 21:12, and then to Isaac were two sons born, Esau and Jacob. The Lord declared to Isaac that it was of Jacob that the seed He has referred to in His promises would come.‬‬‬‬‬‬‬‬‬‬‬‬‬‬‬‬‬‬‬‬‬

Whether men believe it or not, that blessing shall fall upon the elect of the offspring of Jacob in its fulness when the Lord Jesus Christ returns in glory.

One other reason I might suggest why this wonderful promise is repeated by the Lord.

III. THE LORD REPEATS THIS PROMISE IN DEFIANCE OF THE ENEMIES OF HIS PEOPLE

There is none who need to heed these words more than those who are the brazenly defiant opponents of Israel in these last days!

The devil is the enemy of God and a hater of all that the Lord loves and is forever bent upon frustrating the purpose of God. Since a remnant of Israel will feature in the final outworking of God’s purpose, the devil hates that people.

The fire spoken of there is the ‘fire’ of Antichrist’s persecution of the Jews in their land during the final three and half years of this age in what is termed , ‘the great tribulation’.

It is clearly seen today that the Jewish people, with the exception of those who have been brought to a saving faith in Christ, repudiate and reject all that God says in His Word, the sum of which is Christ!

From that time trouble unprecedented came upon Israel. The overthrow of Jerusalem in AD 70 and the slaughter of hundreds of thousands of Jewish people and the dispersion of them throughout the Roman Empire saw the beginnings of the terrible harvest reaped by a favoured race who despised the favour they enjoyed from God.

In Deuteronomy chapter 28:15-68 ‬‬‬‬‬‬‬‬‬‬‬‬‬are found the terrible consequences of rejecting God’s truth and which Israel was plainly warned of and which were withheld by God’s mercy for many, many generations, but which finally fell upon that people after Calvary and its rejection of the Messiah by His people.

Please read that chapter and tremble!

But let those who are instruments in Israel’s tribulation and who presently rejoice at all and every trouble that comes to that people just note what the Lord said to Abraham. “‭‭‭I ‭am‭ the LORD‭ that brought thee out‭‭ of Ur‭ of the Chaldees‭, to give‭‭ thee this land‭ to inherit‭‭ it.”‬‬‬‬‬‬‬‬‬‬‬‬‬‬‬

‬‬‬‬‬‬‬‬‬‬‬‬‬‬‬God will deal most severely with the tormentors of Israel. As he did with Babylon, so He will deal with all who have and will yet put forth their hands against His people. ‬‬‬‬‬‬‬‬‬‬‬‬‬‬‬The prophet Jeremiah, who so often prophesied of the destruction that would be wrought by the Babylonians against sinful Judah, also said this concerning Babylon. “‭And it shall come to pass, when seventy‭ years‭ are accomplished‭‭, ‭that‭ I will punish‭‭ the king‭ of Babylon‭, and that nation‭, saith‭‭ the LORD‭, for their iniquity‭, and the land‭ of the Chaldeans‭, and will make‭‭ it perpetual‭ desolations‭,‭” Jeremiah 25:12. When Babylon, God’s instrument of chastening against the rebellious Jews, had fulfilled God’s purpose, it in turn would be judged by the Lord for its cruelty toward His people. ‬‬‬‬‬‬‬‬‬‬‬‬‬‬‬‬‬‬‬‬‬‬‬

Let all of today’s enemies of Israel take note. As the IRA leader, Gerry Adams, famously, though with an entirely different slant to the words, said: ‘Our day will come!’

In the day that the aforementioned prayer is answered, what glory will be enjoyed by all the redeemed and indeed, by all the inhabitants of the earth! Paul teaches us of that day and shows how that if the casting aside of the Jews brought blessing to the Gentiles therefore, how much more wonderful will the results of the Jews being reconciled and gathered again unto the Lord!