The article below appeared in this morning’s ‘Belfast Newsletter’.

It evoked sad memories for me and moved me to send the following letter to the newspaper.

Your leading article today (21.3.22), recalling the IRA bomb which murdered seven people, including two policemen, outside the offices of your newspaper back in March 1972, brings back many sad memories of those horrific times.

To think that the political ‘heirs’ of the perpetrators of that crime and hundreds like it, now sit as dictators in Stormont as the result of the despicable and treacherous political deal agreed to between the DUP and Sinn Fein/IRA back in 2007, still vexes and grieves me and is very hard to bear when such memories are evoked!

What a betrayal of the many, many innocent victims of IRA terrorism that ‘power-sharing’ deal was.

Sinn Fein can publicly go through a ritual of ‘apologising’ for crimes against children which they did not commit but refuse to apologise for the wicked crimes of which they are truly guilty!

And then to read the words of condemnation of DUP leader, Jeffrey Donaldson in your article rings sickeningly hollow. He says that it “reminds us of the savagery and indiscriminate nature of the republican terror campaign.”

It ought to do more than that!

It ought to smite his conscience and cause him to realise what a wicked arrangement he and his party are involved in and stir him to break that arrangement forthwith with due apologies to the Unionism it betrayed!

Here is the article from the ‘Belfast Newsletter’.

On the 50th anniversary of one of the Troubles’ worst, but largely forgotten, atrocities, a former News Letter reporter has recalled the IRA bomb attack on this newspaper that claimed seven lives. 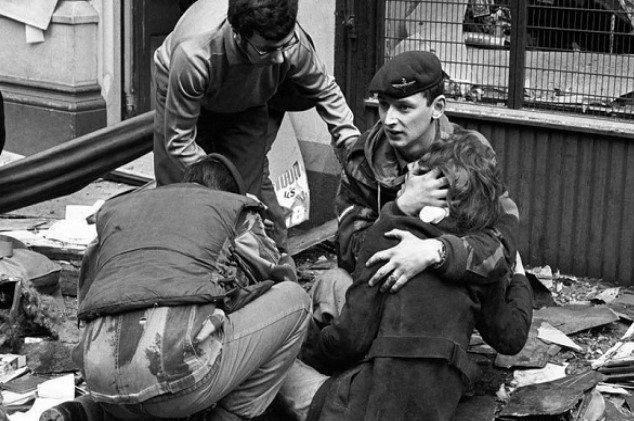 A member of the Parachute Regiment comforts a woman injured when the IRA bombed the News Letter offices in Belfast’s Donegall Street in March 1972.

Writing for a special pull-out supplement in Monday’s edition, veteran journalist Jim McDowell reflects on a day of horror on March 20, 1972 when the IRA decimated Belfast’s Donegall Street with their first major car bomb attack of the terror campaign.

Two police officers and three council bin collectors were among those killed. More than 130 people were injured, some maimed for life.

Jim McDowell was a 22-year-old reporter, still learning his trade, when he sprinted back to the office from the city’s magistrates court on hearing of a bomb scare in the general area.

“I was almost at the corner of Waring Street, when the massive car bomb exploded two minutes before noon – right opposite the News Letter building. Another couple of seconds, and I’d have run head down, head first into the path of the blast,” he said.

“It is the sight of the sheer devastation, the siren sound of the screams of shattered human beings, and the pungent scent of death – allied to the unforgettable stench of 100lbs of gelignite which had just detonated in the first of the huge Provo car bombs – which still stick with me and still shock me to this day.”

He added: “Revolutions and two World Wars hadn’t stopped the oldest English language daily newspaper from going to press since its foundation in 1737. The fascist warlords of the Provos weren’t going to stop it printing, either. And they didn’t…”

The widow and daughter of one of the RUC constables murdered in the bomb attack have also spoken to the News Letter to mark the anniversary, telling of their immense pride in the selfless actions of a police officer who gave his life trying to protect others.

Despite the extensive damage caused by the car bomb, the News Letter went to print that Monday evening, with the Tuesday morning headline stating “Bloody Murder”.

Within days of the atrocity, the UK Government had introduced a ban on cars being left unattended in town and city centres, began planning for a ‘ring of steel’ security fence to be placed around Belfast and, by the end of that week, the government had also collapsed Stormont and implemented ‘direct rule’.

Speaking on the anniversary of the Donegall Street attack, DUP leader Sir Jeffrey Donaldson MP said the bombing “reminds us of the savagery and indiscriminate nature of the republican terror campaign”.

He said: “RUC constables Ernest McAllister and Bernard O’Neill were two of those murdered in that dastardly deed as they sought to clear the area and save the lives of the numerous civilians who were present on that fateful day.

“These two courageous police officers, one a Protestant, the other a Catholic gave their lives to protect others. Ernest and Bernard epitomise the selfless bravery and sacrifice of the RUC, putting themselves in harms way to safeguard the entire community. “Their valour stands in stark contrast to the cowardice and callousness of the IRA bombers who gave not a thought to the innocent lives that they would destroy in this evil deed.”

Sir Jeffrey added: “These facts are indisputable and the pathetic attempts by Irish republicans to rewrite the history of the troubles will never erase such evil nor in any way justify their murderous campaign of death and destruction.

“Yet, there will be no Police Ombudsman’s report to highlight the valour of Ernest McAllister or Bernard O’Neill. There will be no public inquiry to expose the inhumanity and pure evil of the IRA in destroying seven innocent lives.

“The Sinn Fein leadership will look the other way when the call comes to apologise for such evil and depravity.

“It will be left to the seven families, with dignity and quiet determination, to mark this sad anniversary and to remember their loved ones.

“We stand with them and support the families with our thoughts and prayers at this time of painful remembrance.”

SEFF’s director of services Kenny Donaldson said the Donegall Street attack “is yet either heinous atrocity which has been all but airbrushed from our history,” and added: “Provisional IRA terrorists had no concern for who the casualties were, they will claim that they had primary targets but the realities are these, none of those whose lives were stolen were legitimate targets for their campaign of ethnic and sectarian motivated hatred.

“No justice, truth or accountability has even been forthcoming in this horrific case, little focus or concern has ever been granted the families of the innocents slaughtered”.