Here are a number of reports from the local press which shows the sham of Sinn Fein’s attempt to put on a ‘human’ face.

They are in heart what they were in the days of terror and murder which for some forty years they waged against the people of Northern Ireland.

“Can the Ethiopian change his skin, or the leopard his spots? then may ye also do good, that are accustomed to do evil,” Jeremiah 13:23.

How utterly foolish were the DUP leaders to enter power-sharing with them in 2007 and how inexplicable is its continuing in that shameful coalition! 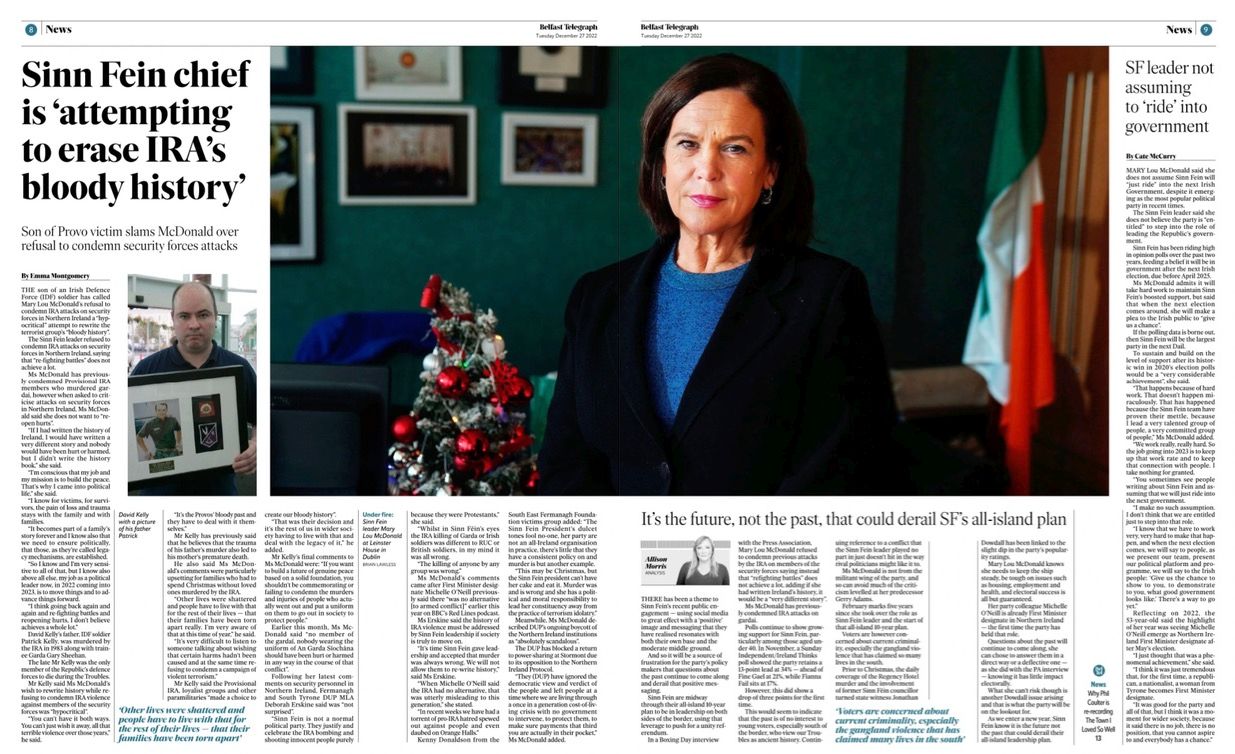 This picture can easily be enlarged on you laptop, phone or tablet for easier reading

To see them now sitting in dominance in Stormont while the DUP pursues its ineffectual and pathetic campaign against the ‘NI Protocol’ on the sidelines, is a sure mark of the judgment of God that has overtaken our Province, due to its persistent adherence to ecumenical apostasy and departure from the Word of God.

The abominations of sodomite perversions and the slaughter of the unborn have become institutionalised in our Province, a region once known, indeed despised, for its adherence to the Word of God.

The DUP has adopted a ‘pro-sodomite’ position, as is evidenced by its silence in response to the highly publicised support it has given to the perverted life-style of the ‘LGBT+’ clique! (See: The DUP’s shameful support for the evil perversions of today!!)

Despite this blatant casting off of its professed allegiance to the Word of God, Free Presbyterians and other Christians persist in supporting the DUP.

What hope is there of an awakening and repentance amongst the public generally over today’s shameful retreat fom the teaching of the Word of God while such a shameful defiance of God is seen amongst those who profess faith in Him?

“For among my people are found wicked men: they lay wait, as he that setteth snares; they set a trap, they catch men. As a cage is full of birds, so are their houses full of deceit: therefore they are become great, and waxen rich.

They are waxen fat, they shine: yea, they overpass the deeds of the wicked: they judge not the cause, the cause of the fatherless, yet they prosper; and the right of the needy do they not judge.

Shall I not visit for these things? saith the LORD: shall not my soul be avenged on such a nation as this?

A wonderful and horrible thing is committed in the land; the prophets prophesy falsely, and the priests bear rule by their means; and my people love to have it so: and what will ye do in the end thereof?” Jeremiah 5:26-31.