It grieves me to pass on this picture which was just sent to me.

I understand the two DUP councillors referred to  are on the left in this picture. The picture is part of the publicity surrounding the announcement of the plans the sodomites have made for their 2023 ‘Festival’ in Belfast. 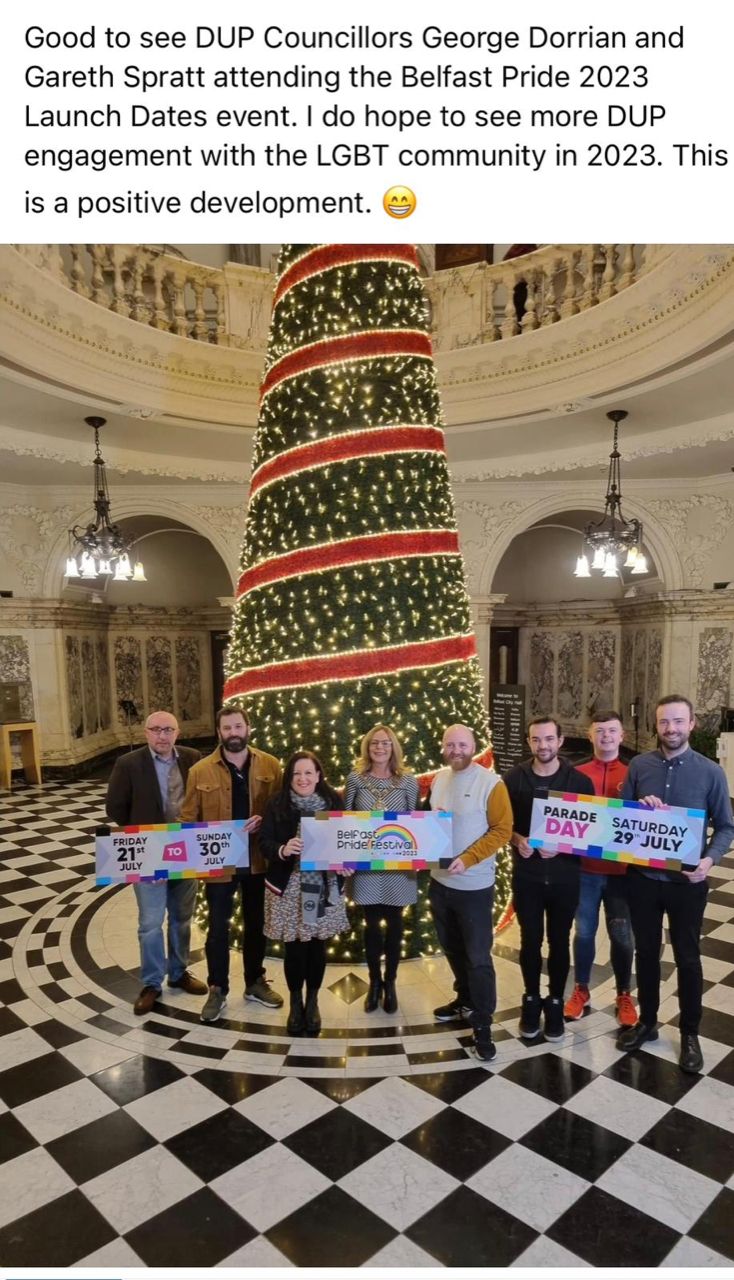 If these two men are not sodomites, they at least show ‘pride’ in the perverted behaviour of those engaged in this abominable lifestyle.

Their action blasts the notion that the party which once campaigned to “Save Ulster from Sodom” back in 1977, is still occupying that moral position!

The DUP has sold out on this issue as well as on many other matters. Some of the issues it has abandoned its former position upon had great constitutional and political importance.

However, none will carry the consequences that this betrayal of truth and righteousness will have.

This picture and the silence of the DUP leadership, indicates that the party has embraced and openly supports that which God abominates!

“Thou shalt not lie with mankind, as with womankind: it is abomination,” Leviticus 18:22.

Such defiance will bring repercussions on the party and ALL WHO CONTINUE TO SUPPORT IT OR VOTE FOR IT!

Christians, particularly in the Free Presbyterian Church, who have continued to support and ally themselves with these (I use a good old Ulster term) Lundies, need to heed the words of the Lord Jesus Christ.

“No man can serve two masters: for either he will hate the one, and love the other; or else he will hold to the one, and despise the other. Ye cannot serve God and mammon,” Matthew 6:24.

“He that is not with me is against me; and he that gathereth not with me scattereth abroad,” Matthew 12:30.

Free Presbyterians who continue to support the DUP must realise that they are thus designating themselves as ‘despisers’ of God and being ‘against the Saviour’ and His cause!

Who is it that truly fears the Lord can for a moment contemplate continuing on such a course amongst company?

“For Jerusalem is ruined, and Judah is fallen: because their tongue and their doings are against the LORD, to provoke the eyes of his glory,” Isaiah 3:8.

The DUP once had the motto: — “The truth shall set you free”.

Henceforth it must be: —  “And judgment is turned away backward, and justice standeth afar off: for truth is fallen in the street, and equity cannot enter,” Isaiah 59:14.