The following was printed in today’s ‘Belfast Newsletter’. 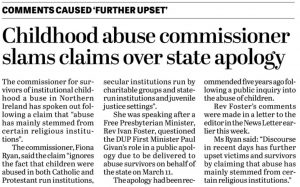 I replied, just a few minutes ago, to this very biased nonsense as follows.

I think that I can claim that my observations on the scandal of institutional child abuse, condemned as they are by Commissioner Fiona Ryan in your newspaper today, were perfectly in keeping with what others saw and said!

The following headline is from a country which had to face the same plague as was experienced here in Northern Ireland and in many, many other nations.

The head of Australia’s royal commission into child sex abuse has condemned Catholic church leaders for failing to recognise the sexual assault of children as a crime.

The Australian Commissioner was obviously a little less blind than Fiona Ryan.

In my original statement I said:

“Let every condemnation be heaped on every wicked and guilty person and establishment, irrespective of their religious profession, but let not any Unionist representative give the impression that the Protestant people share in the guilt and shame of these terrible events.

Bible Protestantism has consistently protested against the evil system of Romanism and the inevitable corruption that the false and evilly pretended ‘celibacy’ of its clerics and nuns will breed.

They and they alone are to be publicly shamed for the vast majority of the wickedness of this deplorable episode that is but a repeat of what is recognised by historians as the ongoing dark practices of Rome!”

For any concerned about my physical wellbeing, I can assure them I never even noticed the ‘slamming’ mentioned in the your newspaper headline!