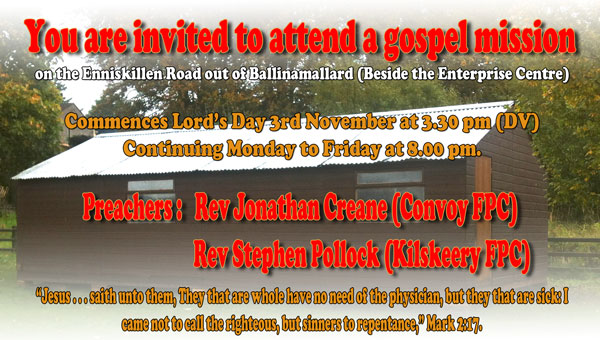 “Boast not thyself of to morrow; for thou knowest not what a day may bring forth,” Proverbs 27:1, KJV.

An Irish biopsychologist, Dr Nigel Barber, believes that religion will be all but replaced by 2041! Dr Nigel Barber’s new book, published earlier this year, “Why atheism will replace religion” says the market for formal religions is being reduced by modern substitutes such as sport and entertainment, especially in more developed countries. Barber pointed out that atheists are more concentrated in richer countries and religion will decrease as personal wealth increases. Of religious groups Barber said, “Noisy as they can be, such groups are tiny minorities of the global population and they will become even more marginalised as global prosperity increases and standards of living improve.” Read more…

It is difficult to believe that any professing Christian could ever be deceived into thinking that ‘Soul Recreation’, written by Tom Schwanda deserved their glowing commendation. And yet this is exactly what Dr Joel Beeke has done by posting the following recommendation on his Reformation Heritage Books website! (Link to RHB website)

“While mystical ideas must always be sifted with biblical discernment, it is undeniable that the Reformed and Puritan tradition contains a richly experiential emphasis on delighting in God through Christ. Tom Schwanda has done us a great service in probing that tradition in this study of Isaac Ambrose in his historical context. He offers a nuanced explanation of Ambrose’s view of being ravished with Christ, the Bridegroom of the church. He . . . encourages evangelicals to return to our Reformed roots in order to grow in authentic spirituality.” —Joel R. Beeke-President of Puritan Reformed Theological Seminary, Grand Rapids

What Dr Beeke has omitted to say is that Schwanda’s book not only considers and draws on the teachings of Ambrose, Calvin and commendable others, but he also promotes and encourages evangelicals to imitate the practices of The Desert Fathers, Ignatius of Loyola, (yes, founder of the Jesuit Order!!!) Richard Foster, Thomas Merton, and other apostates, whose mystical teachings are based on New Age/occult philosophies.

Why are men so trusting of this man despite the accumulating evidence of his compromise and disobedience to God’s Word? Read more here…

Beeke in bad company – and taking good men with him!!

In September past, Joel Beeke was advertised as preaching at Bell Creek Community Church in Livonia, Michigan, USA.

The church website contains quite a bit of information about itself. For instance, under one link it tells us “What happens during the church service?” “Each week is different, but some common elements include the following: Uplifting worship by a great band.” Read more… [Updated in response to communication from Mr Malcolm Watts]

There were two news items which made the headlines in the United Kingdom recently and which are indicators of the spiritual and moral downward spiral of the nation.

God, in His mercy, through the labours of men such as William Tyndale, the translator of the first English Bible, caused the light of His holy Word to shine brightly in our nation, more brightly than in many other nations. It was William Tyndale who said to a blaspheming, ignorant popish priest: “If God spare my life ere many years, I will cause the boy that drives the plough to know more of the scriptures than you!” Read more…

Roman Catholic participation in Refo500 – a fruit of its ecumenical approach

Refo500 was an ecumenical organisation from its commencement as this blog article, which includes a speech by a Roman Catholic Bishop, from a Refo500 press conference in the Netherlands in February 2010 proves conclusively. The ecumenism of the organisation did not merely develop over time, but was foundational in the approach of Refo500 to the Reformation.

It is difficult to accept that anyone could be directly involved in such an organisation and be fully engaged as a partner at the North American launch, as was Dr Joel Beeke, and not be aware of its ecumenical nature!

Amnesties could play a positive role in North’s reconciliation process

Letter bomb: Reminder of threat that the dissidents still pose

How on earth did letter bomb addressed to Theresa Villiers get all the way to Stormont?

Greysteel: A night no one wants to talk about

Sinn Fein’s Gerry Kelly: Dissidents think I’m the worst quisling, and I’m a hate figure for unionists… but I don’t regret my life

Provo Letter Bombs Were Wrong Too

Robinson: Those behind letter bomb to Theresa Villiers ‘won’t further objective by vile deeds’ (Unlike his friends in Sinn Fein!!)

Gerry Kelly speaks: ‘I looked at him and said: “Don’t move or I’ll shoot.” That’s all I’ll say…’ (Kelly’s comments on shooting of prison officer during ’83 jail break)

Nationalist rewriting of history must be urgently challenged

Willie Frazer is issued ‘most serious threat’ yet

Halloween: An ungodly thing to celebrate

Shankill bomb: ‘I’d have killed bomber I rescued if I had realised just who he was’

I blame Shankill bombers for the loyalist revenge killing of Martin

Shankill bomb: Massacre lit the blue touchpaper on a week of deadly reprisals

Shankill bombing was criminality no cause could justify

Book lifts lid on over 120 killings by loyalist gangs

Terrorism should not be publicly honoured – MP

Shankill bomb: Murderous week when Ulster was teetering on brink

Getting to truth of sectarian slaughter

‘After appearance at GAA event can the DUP now walk Robinson’s talk?’

National Statistics Office: The people of County Fermanagh are the happiest in the United Kingdom

Use Maze centre cash to care for Troubles victims’: Nesbitt

Gerry Adams: ‘I failed my niece over sex abuse’

The unravelling of Gerry Adams

This is no time to prosecute the perpetrators of ‘Bloody Sunday’

‘Catholic’ confession is good for the soul – says Archbishop of Canterbury

Prosecution of soldiers for Bloody Sunday could be ‘disastrous’ – MP

Shankill bomb 20 years on: I get angry when outsiders say ‘forgive and forget’ – they did not see what I saw

Not so fast, Adams

Outrage at Brolly’s ‘pride’ over club named after INLA man

What has Changed in the GAA in Four Months?

Church of Ireland row over sectarianism comments by Dublin archbishop

‘Institutionalised’ abuse led to death of 19 pensioners at care home

DPP in North under pressure over Adams investigation

Orange to ‘upscale’ protests at Twaddell

The brother of Claudy bombing victim: I’ll keep fighting until I get justice

Claudy relative: I’ll keep fighting until I get justice

Gerry Adams: ‘I knew Liam was working with young people’

Both Adams and Sinn Fein are now in serious trouble

Adams must face same fate as bishops for abuse failures

Public are tired of broken promises

Video: Furious DUP MLA calls on cops to investigate his own dad for dealing fake cigarettes

Adams is badly wounded and his enemies can smell blood

Letter – Sinn Fein only want shared future on their terms

I would like to meet gunmen who attacked church, says Darkley victim

Gerry Adams not concerned over abuse review (Why should he be? The government is afraid of upsetting the “Peace Process” to to take up any issue which might annoy SF!)

Gerry Adams acknowledges head of Public Prosecution Service, Barra McGrory, was his legal adviser when interviewed about abuse allegations against his brother

Tell the truth, Gerry Adams, it will set you free… and the rest of us

How are you advancing our interests, victims ask Kathryn Stone

Poll delivers a massive vote of no confidence in Stormont politicians