“For I have told him that I will judge his house forever for the iniquity which he knoweth because his sons made themselves vile and he restrained them not,” 1 Samuel 3:13.
(The synopsis of a sermon preached in Faith Free Presbyterian Church,Greenville, South Carolina, USA, on 28th October 1993.)

I know the subject that has been given to me is rather general but I want to, as it were, be a little bit more particular and speak on this general subject but applying it to that which faces us as parents in these days.

I was thinking coming to the meeting that really my wife should be here to speak on this subject. She has many years of experience as a teacher and as a principal in our Christian school. She had a number of years of experience in a state school before that. And I suppose even more important she is the mother of six children and that I’m sure, by way of experience, has eclipsed all the years in schools of every description. And I suppose you can even add to that she’s had to look after me and perhaps that has eclipsed it all. Read more…

“Thus saith the Lord GOD; Because the Philistines have dealt by revenge, and have taken vengeance with a despiteful heart, to destroy it for the old hatred; therefore thus saith the Lord GOD; Behold, I will stretch out mine hand upon the Philistines, and I will cut off the Cherethims, and destroy the remnant of the sea coast. And I will execute great vengeance upon them with furious rebukes; and they shall know that I am the LORD, when I shall lay my vengeance upon them,” Ezekiel 25:15-17.

The weapons of war that men employ have changed radically over the years. Those ready to be employed by nations today are beyond what men could have imagined a generation ago!
However, there is a war that has been ongoing since the beginning of this world and earlier still, which is executed with the same weapons and tactics with which it began! Read more…

“It was general wickedness not gay sex alone which killed off Sodom city”.

This was the title of a letter that appeared in the ‘Belfast Newsletter’ of May 23rd from one, ‘Colin Nevin’. Read it here.

I felt compelled to write a reply to what he said for he seemed to be suggesting that perhaps ’sodomy’ is not the awful sin that some make it out to be! Below is my submitted response.

Sir,
In today’s edition, your correspondent Colin Nevin, who (I presume it was he who added the addendum) informs your readers that having lived in Israel he had a knowledge of Hebrew.
A knowledge of the Bible is the first essential in these matters! Read more…

An answer to Atheist Alex Kane

Alex Kane is an openly avowed atheist. He does not believe in the existence of God – at present. There is a time coming all too soon for him when he will believe that there is a God and that He is indeed the God revealed in the Bible!

However, at present he plays the fool of which David speaks in Psalm 14:1. “The fool hath said in his heart, There is no God.”

Classified as such by the Word of God, one cannot expect too much sense out of him.

He wrote an article in the Belfast Newsletter of Monday 13th May, 2019, headlined: DUP seems to be preparing to face down the Free Presbyterians.

Personally, if that headlines means what I think it means, the ‘facing down’ cannot come quickly enough for me! Ever since the DUP entered power-sharing with unrepentant murderers and their political fellow-travellers, I have prayed that every Free Presbyterian would realise that they can have no part with such an ungodly political party as the DUP. Read more…

Now the Spirit speaketh expressly, that in the latter times some shall depart from the faith, giving heed to seducing spirits, and doctrines of devils; speaking lies in hypocrisy; having their conscience seared with a hot iron, 1 Timothy 4:1-2.

Many Christians are getting behind Belfast Marathon Sunday switch

We have to put “ ” around the word Christians for those who openly promote the desecration of the Lord’s Day forfeit the right to use that name!!!

Belfast Marathon: Organisers apologise after course is 0.3 miles too long

That is the second mistake by these organisers of Sabbath desecration!!!

This is the reality of the support for murder found in Roman Catholic areas!!!

Once dominant party in Belfast reduced to just two seats

Not a cause for gloating by the DUP but cause to heed the warning!! They have stepped onto the same treacherous path!!!!

As one of the usual ‘Easter’ unity events, Roman Catholic and Church of Ireland ecumenists in the Castlewellan area had what has become an annual march.

Free Presbyterian ministers in the area wrote to ’The Mourne Observer’ and protested at the anti-Bible nature of the event.

The protest was reported in the ‘Belfast Telegraph’’ – read the report here.
The letter of protest led to a number of reactions from ecumenists to which this letter is the final response by Rev Daniel Henderson on behalf of the local Free Presbyterian ministers.

It is refreshing to read of the spirit of protest that is still alive in the Mournes! Read more…

Are Free Presbyterians wrong when they support a party which fields a sodomite candidate?

Is political activity exempt from the rule of God’s Law?

An earnest appeal to all ministers, elders and members of the Free Presbyterian Church of Ulster.

No sin, of itself, goes away, nor is spiritual wholeness restored by natural volition!

Like a disease, untreated sin will only become worse until spiritual, even physical death ensues. There is evidence of this in the church at Corinth which had departed from uprightness and propriety to indulge in sinful practices. “But let a man examine himself, and so let him eat of that bread, and drink of that cup. For he that eateth and drinketh unworthily, eateth and drinketh damnation to himself, not discerning the Lord’s body. For this cause many are weak and sickly among you, and many sleep,” 1 Corinthians 11:28-30. Read more…

Perhaps I should have entitled this articled: The Day Ulster WAS SEEN To have Changed Unutterably!

The change has been developing for quite some time, just like the spirit of Antichristianity. “For the mystery of iniquity doth already work: only he who now letteth (holds back, detains) will let, until he be taken out of the way,” 2 Thessalonians 2:7.

I believe its first manifestations can be traced to the day in 2007 when there was an endorsing by a sizeable section of the Protestant people of Ulster of ‘terrorist murderers in government’!

I read this morning in my daily reading the first chapter of Isaiah, verse 9, where it is stated by the prophet in a day of backsliding and departure from God: “Except the LORD of hosts had left unto us a very small remnant, we should have been as Sodom, and we should have been like unto Gomorrah.”
How applicable is that verse to the cause of God in Ulster this sad and tragic morning!

There is much rejoicing in the camps of the major political parties here in Northern Ireland. Especially it is so in the Democratic Unionist camp. The newspapers and television internet sites are adorned profusely with rejoicing politicians embracing, shaking hands and mouths wide open in exorbitant delirium!

There are also many pictures of Christians congratulating each other on success at the polls. Read more…

I was sent the image below from DUP MP, Mr Paul Girvan’s Facebook page.

How sad to see such a ringing endorsement of a sodomite from professing Christians for many in the DUP share in Mr Girvan’s folly.

This must bring Heaven’s response to that which God calls an ‘abomination’! Christians cannot defy God with impunity! 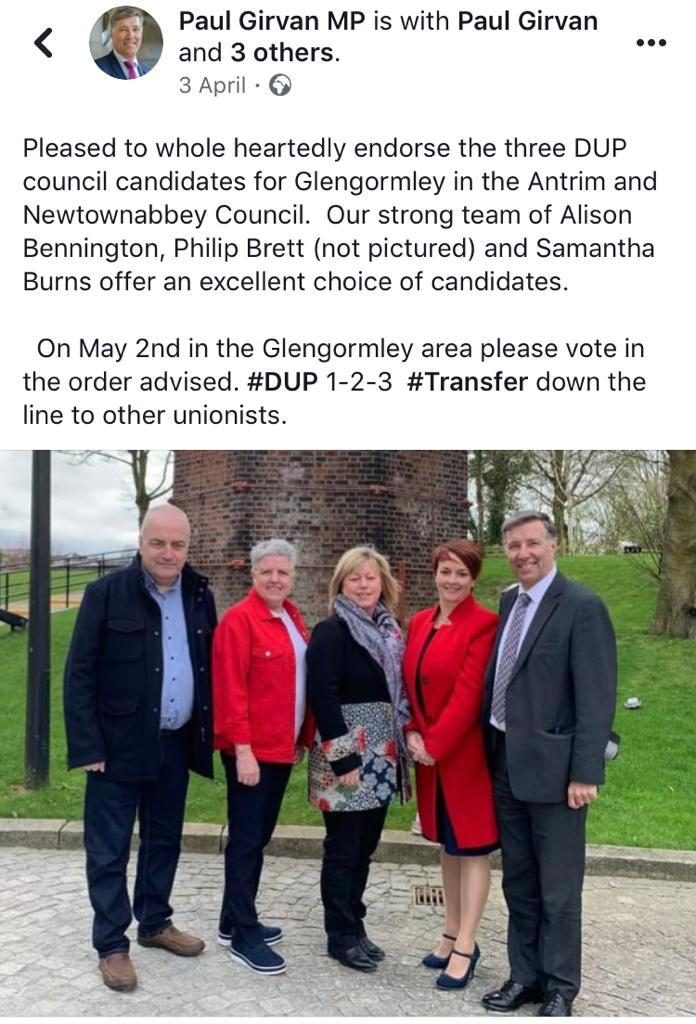 “But the meek shall inherit the earth; and shall delight themselves in the abundance of peace. The wicked plotteth against the just, and gnasheth upon him with his teeth. The Lord shall laugh at him: for he seeth that his day is coming,” Psalm 37:11-13.

The ‘ecumenical messiah’ who delights to bask in the media spotlight and ‘blow his own trumpet’!!!

New Northern Ireland talks process to begin on May 7

‘Joint Authority’ in operation and the DUP completely subservient!!!!

DUP gay marriage stance ‘not up for debate’ despite lesbian candidate

This is an exercise in prevarication!!!! It just cannot be denied that it is NOW DUP policy to select and sanction a sodomite candidate, spending members’ money to have her elected, claiming that she is an ‘excellent candidate’ and that their supporters should vote for her!

Such endorsement of sodomy can only advance its evil objectives just as surely as promoting the sale of booze will produce drunkenness!!!

These misgivings stated in this article are felt by many FPs who deeply grieve over these facts!!! Arlene Foster asked priest to pray!!!!