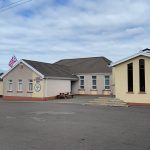 The news item below is part of a news report on today’s BBC Northern Ireland news site.Its information is to be noted by those who care for the future of the truth of the gospel in Ulster.This Roman Catholic school is to become an ‘Integrated School’. That does not mean that it ceases to be a ‘Roman Catholic’ school. It just means it has access to better Government financial funding! It has not thrown over its Romish teachings and ethos and all its pupils, including the ‘Protestant’ pupils it hopes to recruit, will be subject to those falsehoods.

The change of status was approved by former Education Minister, DUP MLA, Mr Peter Weir, a professing Christian! The promotion of ‘Integrated Education’ has been the policy of the DUP for a number of years now! As we have said in the past, the DUP is now part of the Ecumenical Camp in our land!

In truth, this is but part of the ‘ecumenicalising’ of Northern Ireland. It is a less direct attempt by Rome to subtly embrace the Protestants of Ulster who have been lulled into a sleep of death. Sadly, there are many, many who have succumbed to Rome’s trickery. It is little wonder that this is so for the Church of Ireland, the Presbyterian Church and the Methodist Church have all laboured to sell this deceit to their people.

It began in September 1979. It is staffed by dedicated and faithful Christians who sacrificially labour to the honour of the Lord and for the spiritual and eternal well-being of children. It has been sustained financially by the kindness of the Lord through the generosity of many Christians, including the fee-paying parents. The school, unlike the Roman Catholic and Integrated schools receives absolutely no financial support whatever from the Government. In that we rejoice for it means that the school is in control of its curriculum content, the character of its teachers and is free to teach the Word of God to the pupils in its entirety.

Play-time for some of the pupils of KICS at their first ‘break’ of the new school term under the watchful eye so their Principal, Mrs Pamela Foster. The polytunnel in the background was donated by the McFarland family and is used as a gardening project by the pupils.

As another year begins please pray for the school and the other Independent Christian schools within the Free Presbyterian Church, their pupils and staff.

May the Lord have mercy on our poor Province and its benighted people and preserve a remnant who are faithful to the truth!

Former Education Minister Peter Weir approved the change of status for Seaview Primary in Glenarm in March.The County Antrim school was subsequently congratulated by the film star Liam Neeson on its move.It is opening for the 2021-22 school year as Seaview Integrated Primary School on Wednesday.About 7% of pupils in Northern Ireland are taught in formally integrated schools.They aim to enrol approximately equal numbers of Catholic and Protestant children, as well as children from other religious and cultural backgrounds.

The first Catholic school in Northern Ireland to formally change its status to integrated is to open its doors for pupils.

Existing schools can change to become formally integrated as part of a process that includes a ballot of parents to find out if a majority favours integration.Seaview Primary is the first Catholic maintained school in Northern Ireland to ‘transform’ in this way.