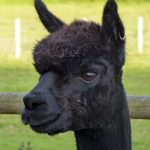 It is one of many accounts with which the public were regaled in the saga of an alpaca that was infected with ‘bovine tuberculosis’ or cattle TB as we ‘country folk’ would know it!

As such the animal, like any other animal so infected, was a threat to the health of other animals nearby. A department of Agriculture website says this of the disease. “It is caused by the bacterium Mycobacterium bovis (M. bovis) which can also infect and cause disease in many other mammals including humans, deer, goats, pigs, cats, dogs and badgers. In cattle, it is mainly a respiratory disease but clinical signs are rare. TB in humans can be caused by both Mycobacterium bovis and the human form, Mycobacterium tuberculosis.”

The owner of the alpaca and her friends claimed that the putting down of the animal was murder. The alpaca was brought to England from New Zealand in August 2017 by his owner Helen Macdonald. It twice tested positive for bovine tuberculosis in August and November that year.

More than 140,000 people from around the world had signed a petition against Geronimo’s culling.

I find the reports of the ‘concern’ for this sick and infectious animal in great contrast with the legal murder of perfectly healthy unborn children in the United Kingdom and across the world generally.

Here is a graph copied from a Government website detailing the number of yearly abortions since 2010. It has risen from nearly 190,000 to some 210,860 abortions in England and Wales in 2020, the highest since records began.

Of those who were ‘overcome’ with grief at the culling of one alpaca, a procedure which takes place constantly amongst cattle for the safety of the national herd, I would ask the question :— “Does the annual slaughter of the thousands of innocent unborn babies cause you as much distress?”

Somehow, I doubt it as this wicked BUT legal killing of babies goes on under the auspices of the NHS with little or no protest except from a comparatively small minority whose voice is ignored by the public and by Government!

However, it is not ignored by the Lord. Our nation along with the nations of the world which practise this barbarity, will answer to Him one day.

He said of those in a past age, who slaughtered their children for reasons not unlike many who abort their offspring today: “But they set their abominations in the house, which is called by my name, to defile it. And they built the high places of Baal, which [are] in the valley of the son of Hinnom, to cause their sons and their daughters to pass through [the fire] unto Molech; which I commanded them not, neither came it into my mind, that they should do this abomination, to cause Judah to sin. And now therefore thus saith the LORD, the God of Israel, concerning this city, whereof ye say, It shall be delivered into the hand of the king of Babylon by the sword, and by the famine, and by the pestilence,” Jeremiah 32:34-36.

The consequences of the ancient practice of child sacrifice were dire indeed and it will prove so again for this modern slaughter which far out exceeds numerically the number of innocent victims world-wide. The World Health Organisation estimates that “every year in the world there are an estimated 40-50 million abortions. This corresponds to approximately 125,000 abortions per day.”

What a harvest those engaged in this unspeakable wickedness will reap!

And while this slaughter goes on there are those who gain the attention of the media and the sympathy of the unperceptive, as they complain about a perfectly legitimate act of culling an alpaca in the ongoing and vitally necessary process of preserving the health of other animals!!