I received from a family member in Australia this morning the link to this article in ‘The Guardian’ newspaper of Wednesday 17th August.

I know that you will be interested in the news and rejoice that there are those who seek to oppose the dreadful apostasy of the Anglican Churches.

I think it fair to comment that while it is most welcome to see the stand against this sin that is taken by these folk, there seems to be no evidence of any real understanding of the Bible’s teaching on the latter-day apostasy.

Here are two examples of what the Bible says of the last days.

“Now the Spirit speaketh expressly, that in the latter times some shall depart from the faith, giving heed to seducing spirits, and doctrines of devils; speaking lies in hypocrisy; having their conscience seared with a hot iron; forbidding to marry, and commanding to abstain from meats, which God hath created to be received with thanksgiving of them which believe and know the truth. For every creature of God is good, and nothing to be refused, if it be received with thanksgiving: for it is sanctified by the word of God and prayer. If thou put the brethren in remembrance of these things, thou shalt be a good minister of Jesus Christ, nourished up in the words of faith and of good doctrine, whereunto thou hast attained,” 1 Timothy 4:1-6.

“This know also, that in the last days perilous times shall come. For men shall be lovers of their own selves, covetous, boasters, proud, blasphemers, disobedient to parents, unthankful, unholy, without natural affection, trucebreakers, false accusers, incontinent, fierce, despisers of those that are good, traitors, heady, highminded, lovers of pleasures more than lovers of God; having a form of godliness, but denying the power thereof: from such turn away,” 2 Timothy 3:1-5.

Was this truth understood and the departure of mainstream Anglicanism seen in this context, then there would be no question of it ever repenting and returning back to the truth of God, as Rev Peter Palmer would seemingly hold out some hope of. He is reported as saying: “If the leadership would repent and turn back to the teachings of the bible, we wouldn’t need the Diocese of Southern Cross. I’d shut it down and come back.”

There is no repentance or reformation for apostasy; it is ‘given up of God’.

“Wherefore God also gave them up to uncleanness through the lusts of their own hearts, to dishonour their own bodies between themselves: who changed the truth of God into a lie, and worshipped and served the creature more than the Creator, who is blessed for ever. Amen. For this cause God gave them up unto vile affections: for even their women did change the natural use into that which is against nature: and likewise also the men, leaving the natural use of the woman, burned in their lust one toward another; men with men working that which is unseemly, and receiving in themselves that recompence of their error which was meet,” Romans 1:24-27.

However, we trust that a fuller understanding of these things will be given to God’s people in Australia. We do pray that the Lord will lead His faithful people on in obedience to Himself, whatever opposition or setbacks they may encounter.

I might add that I pray that just such an awakening would take place amongst those professing faith in Christ amongst members of the Church of Ireland!

As a matter of information I include a picture posted on the internet of a man in Germany who has contracted monkey pox and as a result his nose has started to rot.

The caption under the picture stated: 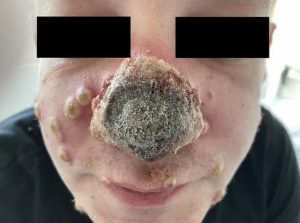 “A 40-year-old monkeypox patient’s nose started to rot off because of an undiagnosed HIV infection in Germany, doctors claim.”

Monkey pox is apparently most prevalent amongst the ‘sodomite community’. This picture illustrates what is meant by the words: “Receiving in themselves that recompence of their error which was meet,” Romans 1:27. 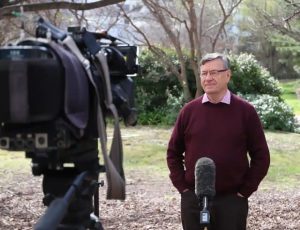 The first congregation of Australia’s breakaway Anglican church was about to meet in a suburban RSL, and the man who was supposed to be leading the service was worried.

Ten minutes before the Rev Peter Palmer was due to start, there were less than a dozen people at the Beenleigh RSL and golf club in south-east Queensland.

“Then all of a sudden all these people walked in … and we started to worship God together, in a whole new style of Anglican worship,” Palmer said at a conference on Monday.

The stakes were high: Palmer had previously given notice as the parish priest of St George’s Anglican Church Beenleigh, telling an “envoy” of the archbishop of Brisbane he was leaving to join Gafcon, a breakaway group that is dividing the Anglican church across the world. 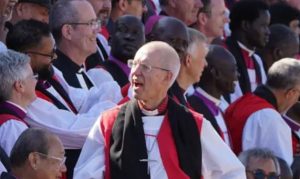 Justin Welby says it is ‘very difficult’ to hold church together over sexuality.

This shows the man’s ignorance of God, His will and His Word for it is has ever been God’s purpose to separate His people from all that is wicked rather than seeking to holding in some form of unity with the devil’s crowd.

Gafcon, the Global Anglican Future Conference, says it’s fighting back against a “revisionist” interpretation of the Bible by the leadership of the Anglican church which has allowed the ordination of women, the blessing of same-sex marriages and more relaxed views regarding divorce.

Palmer said when he was asked by the envoy why he was leaving to join Gafcon, he responded: “I cannot go along with same-sex blessings, I will not allow that to happen, and I’ve got to stand up to this”.

Rather than serving his customary three months leave, Palmer said he was told that his service the following Sunday would be his last with the Anglican church.

He said he negotiated to get an extra week of service – to allow his parishioners to “grieve” – given he had been at the church for more than six years.

Palmer then told his parishioners he was leaving to join a diocese that explicitly forbids same-sex marriage.

“Many of them were shocked … and they actually asked me ‘What do we do?’

“So I thought about it, and I prayed about it, and I decided that there was only one way to do it, which was to stand up against it, and call it out for what it is: God says that it’s a sin.”

Palmer’s service last weekend was the first held by the Diocese of the Southern Cross, the only Australian affiliate of Gafcon.

The diocese was officially launched this week at a Gafcon conference in Canberra by its new bishop, Glenn Davies, the Anglican church’s former archbishop of Sydney.

“This is a sad day, in many ways,” he told the Guardian.

“If the leadership would repent and turn back to the teachings of the bible, we wouldn’t need the Diocese of Southern Cross. I’d shut it down and come back.”

It is the latest expansion of a movement that is dividing the church across the world, with similar dioceses in North America, South America, Africa and Europe.

“I’m not procuring people, I’m not luring people in, I’m not recruiting – I’m providing a safe haven, and they can come to me,” Davies said.

The Anglican church was the main denomination in Australia throughout the 19th and 20th centuries. But according to the latest census, Anglican affiliation dropped more than any other religion in the past five years, from 3.1 million to 2.5 million people – a decrease of nearly one in five, from 13.3% to 9.8% of the population.

Brian Douglas, an Anglican priest and adjunct research professor at the Australian Centre for Christianity and Culture in Canberra, said he expected the split in the church to widen.

“There are effectively two Anglican churches in North America now, and I suspect that’s what will happen here,” he said.

Those divisions in the US had led to legal disputes over whether parishes that had broken away from the Anglican church were able to still hold services in their local churches, but Douglas said similar issues may be avoided in Australia, as the Anglican church held its property in trust, meaning none was owned by parishes.

As the dust settles, Palmer is preparing for his next service.