This picture was posted by IRA supporter (at least such) Conor Murphy. He and Sinn Fein vice president, Michelle O’Neill have publicly engaged in the marking of the Queen’s platinum celebrations. O’Neill wrote a letter to the Queen congratulating her for reaching 70 years on the throne!

They were joined in this act of hypocrisy by two DUP politicians, pictured above peeping over Murphy’s shoulder as they creep along at his heels.

The hypocrisy involved is of the highest order since both Murphy and O’Neill are prominent in Sinn Fein, the political wing of the IRA. The IRA did its best to murder the Queen and did actually murder her cousin, Lord Mountbatten, in 1979.

The IRA campaign which began in the lates 1960s and lasted some 40 years, was directed chiefly, if not exclusively, against those loyal to Her Majesty or who showed any sympathy toward the United Kingdom.

For O’Neill and Murphy to now put on a show of pleasure at the Queen’s seventy years on the throne, runs entirely contrary to what it was the whole Republican movement desired and sought after by every foul means.

The two DUP politicians pictured are of that ilk which has yielded entirely to the sham ‘peace and good will’ manufactured by the lies and deceit of the ecumenical churches.

The ‘peace’ philosophy has persuaded the DUP and others under the influence of the ecumenical drug, to accept the IRA/Sinn Fein claim that they have changed. The change they claim for themselves does not preclude them celebrating most passionately the so-called ‘heroic’ exploits of their comrades in murder and terror. 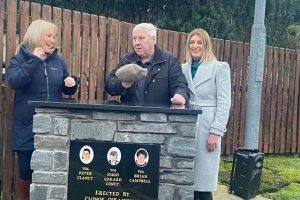 Michele O’Neill at the Clonoe O‘Rahilly GAA Club’s unveiling of a monument to club members and IRA volunteers Peter Clancy, Hugh Gerard Coney and Brian Campbell, who were all shot by the security forces while they were engaged in terrorism.

Of course, hypocrisy is second nature to Sinn Fein. You cannot engage in terror and murder by night and portray yourself as the soul of benevolence and humanity during daylight hours, without being a master of cant and affected piety.

So successful have they been in perfecting this devilish dissimulation that prime ministers, presidents and even the Queen on her visit to Northern Ireland in 2012 have swallowed the lie. The Queen embraced Martin McGuinness as a champion of peace even though it was claimed by the former IRA “intelligence director Kieran Conway” that he was head of the IRA when Lord Mountbatten was murdered.

The DUP, which in former years sought to have Ulster understand the duplicity of Sinn Fein and its links to the IRA’s campaign of murder, has since 2007 become more and more entangled politically and socially with this heinous organisation. The two DUP members in the company of Conor Murphy betokens this alliance that was formed and is ever strengthening, despite the public political ‘spats’!

For the Christian there is the simple lesson that we should ever remember. Artifice and two-facedness is to mark society more and more in the closing days of this age. Paul says that the world at large shall be marked by “having a form of godliness, but denying the power thereof: from such turn away,” 2 Timothy 3:5. There will be a making of a show of religion but it is a religion without divine power and the professors of such are strangers to experimental and true godliness.

It is as Isaiah records the description given by the Lord of such a time. “Wherefore the Lord said, Forasmuch as this people draw near me with their mouth, and with their lips do honour me, but have removed their heart far from me, and their fear toward me is taught by the precept of men,” Isaiah 29:13.

The exercise in Armagh Cathedral on June 3rd, presided over by Arch-ecumenist, Lord Eames of the Church of Ireland and Romanist priest, Archbishop Eamon Martin, was exactly of this nature. It is to the shame of any professing Christian that they were found within this whited sepulchre, full of the bones of dead religion and of all spiritual uncleanness.

The answer she gave was: “All this I promise to do.”

She broke that promise when she visited the pope

As well as these serious moral and constitutional deviations, we have witnessed the deplorable scandals which have deluged the royal family in public shame, none of which has resulted in any personal and forthright condemnation by the Queen, which surely becomes someone professing faith in God and obedience to His Word.

Allegiance to the Lord and His Law comes before any allegiance to an earthly monarch, irrespective of how fondly they may be looked upon by many. I have had a life-long affection for the Queen, but that does not preclude me from seeing the faults of the last seventy years and endorsing what the Word of God has to say of those faults.

When good king Jehoshaphat “joined affinity with Ahab,” (2 Chronicles 18:1) faithful Jehu the seer, rebuked him. “And Jehoshaphat the king of Judah returned to his house in peace to Jerusalem. And Jehu the son of Hanani the seer went out to meet him, and said to king Jehoshaphat, Shouldest thou help the ungodly, and love them that hate the LORD? therefore is wrath upon thee from before the LORD. Nevertheless there are good things found in thee, in that thou hast taken away the groves out of the land, and hast prepared thine heart to seek God,” 2 Chronicles 19:1-3.

Jehoshaphat’s very real virtues did not cancel out his sins nor permit them to go unreproved!

The words of the hymn depicts well our day!

Swift to its close ebbs out life’s little day;
Earth’s joys grow dim, its glories pass away.
Change and decay in all around I see.
O thou who changest not, abide with me.

That being infallibly so, we must unchangingly adhere to His Law and walk according to its precepts.

That is the duty of every true child of God in these shifting, erratic times.