“But the men of Sodom were wicked and sinners before the LORD exceedingly,” Genesis 13:13 — “Then the LORD rained upon Sodom and upon Gomorrah brimstone and fire from the LORD out of heaven; And he overthrew those cities, and all the plain, and all the inhabitants of the cities, and that which grew upon the ground,” Genesis 19:24-25. 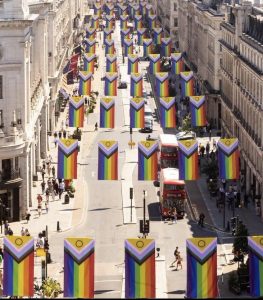 Regent Street in London bedecked with ‘Gay Pride’ flags for the first time in history and paid for by the Crown Estate. It has commissioned 100 Pride flags to hang above the street to mark ‘London Gay Pride’ parade this weekend! The Crown Estate is an independent commercial business, created by Act of Parliament. The Crown Estate belongs to the reigning monarch ‘in right of The Crown’, that is, it is owned by the monarch for the duration of their reign, by virtue of their accession to the throne.

A PICTURE OF THIS PRESENT TODAY

The verse: “But the men of Sodom were wicked and sinners before the LORD exceedingly,” Genesis 13:13, pictures for us the state of this wicked rebellion today in our land. Sodomy was always a perversion found amongst the pagan nations of the world and the reprobate elements amongst those professing faith in the true God. That is seen in that the Lord had to warn His people to avoid utterly such a sin. “Thou shalt not lie with mankind, as with womankind: it is abomination,” Leviticus 18:22.  The Lord adds the final warning about all the abominations He had strongly censured in the foregoing verses. “Defile not ye yourselves in any of these things: for in all these the nations are defiled which I cast out before you: and the land is defiled: therefore I do visit the iniquity thereof upon it, and the land itself vomiteth out her inhabitants. Ye shall therefore keep my statutes and my judgments, and shall not commit any of these abominations; neither any of your own nation, nor any stranger that sojourneth among you: (For all these abominations have the men of the land done, which were before you, and the land is defiled;) that the land spue not you out also, when ye defile it, as it spued out the nations that were before you. For whosoever shall commit any of these abominations, even the souls that commit them shall be cut off from among their people,” Leviticus 18:24-29.

The word that the Lord uses regarding His reaction to such sins: ‘vomiteth’, verse 25 and ‘spue & spued’, verse 28, is a clear indication that the Lord cannot tolerate such behaviour. In His mercy, He is longsuffering today as He was in the days of Noah (Genesis 6:3). Peter refers to God’s longsuffering in 1 Peter 3:20. “Which sometime were disobedient, when once the longsuffering of God waited in the days of Noah, while the ark was a preparing, wherein few, that is, eight souls were saved by water.”

Sin is like a cancer, indeed sinful ‘babblings’  is called a “canker” in 2 Timothy 2:17. As cancer does not remain dormant but advances and grows within the body, eventually destroying it if unchecked., so it is with wicked spiritual malignities!

We hear all too much of this physical malignancy today. It would be good if society were to recognise that many of those things which they have ‘sanitised’ and ‘legitimised’ in recent years, such as sodomy, are in fact, spiritual cancers which will bring eventual ruination upon society, even as it did on Sodom.

A PICTURE OF A COMING DAY

Let it be known that there is an end to God’s patience. He “spared not” Sodom. “And turning the cities of Sodom and Gomorrha into ashes condemned them with an overthrow, making them an ensample unto those that after should live ungodly,” 2 Peter 2:6.

The verses: “Then the LORD rained upon Sodom and upon Gomorrah brimstone and fire from the LORD out of heaven; and he overthrew those cities, and all the plain, and all the inhabitants of the cities, and that which grew upon the ground,” Genesis 19:24-25, indicate into what sodomy develops and grows — something that MUST be utterly destroyed! These things were recorded in mercy as an “ensample unto those that after should live ungodly”, but little or no heed has been paid to the warnings.

The word “exceedingly” in Genesis 13:13 indicates how that sodomy ‘outweighs’ or preponderates all other sins! The words preceding it underscore the offensiveness of sodomy. It is a sin that is “before the LORD”, that is ‘in His face’. It is something that He observes with abhorrence! The sodomites were ‘sinners of no common character; they excelled in unrighteousness, and soon filled up the measure of their iniquities,’ Adam Clarke.

There was an impudence displayed by the men of Sodom with which we are all too familiar today and which is epitomised in the flaunting of the flags flying today in Regent Street in London.

The words of Genesis 19:24-25 indicates clearly what God has purposed for the evil-doers. They tell us of the ‘eternal future’ of the sodomite. “Then the LORD rained upon Sodom and upon Gomorrah brimstone and fire from the LORD out of heaven; and he overthrew those cities, and all the plain, and all the inhabitants of the cities, and that which grew upon the ground.”

In their arrogance, many sodomites claim that they will have a place in heaven. It is true that there is that in heaven which is especially marked for them! Here it is identified as ‘brimstone and fire’!

The child of God is not privileged to be given a full knowledge of what awaits them in glory. “But as it is written, Eye hath not seen, nor ear heard, neither have entered into the heart of man, the things which God hath prepared for them that love him,” 1 Corinthians 2:9. “Beloved, now are we the sons of God, and it doth not yet appear what we shall be: but we know that, when he shall appear, we shall be like him; for we shall see him as he is,” 1 John 3:2.

While the glory awaiting the child of God is beyond our comprehension, the horrendous judgment awaiting the sodomite is fully comprehensible. The impact of heaven’s ‘brimstone and fire’ falling upon Sodom and its neighbouring cities, is evident still in the Dead Sea area of Israel, significantly the lowest spot on the face of the earth!

They who sinned before the face of God, will receive ‘from the Lord’ a clear indication of His hatred of their behaviour. Please note the double emphasis in the phrases, “ the LORD rained”, and “from the LORD out of heaven”. It was a total destruction. “He overthrew those cities, and all the plain, and all the inhabitants of the cities, and that which grew upon the ground.”

Is it not a measure of the mercy of God to those who shamefully engage in this repulsive lifestyle that He should give such a graphic warning! It surely must be. Sadly, very few have ever taken any heed to the warning. As Paul wrote of those recalcitrant Jews who persisted in rejecting the gospel, so it may be said of the sodomite community.

“Or despisest thou the riches of his goodness and forbearance and longsuffering; not knowing that the goodness of God leadeth thee to repentance? But after thy hardness and impenitent heart treasurest up unto thyself wrath against the day of wrath and revelation of the righteous judgment of God; who will render to every man according to his deeds: to them who by patient continuance in well doing seek for glory and honour and immortality, eternal life: but unto them that are contentious, and do not obey the truth, but obey unrighteousness, indignation and wrath,” Romans 2:4-8.

The present ‘intolerable’ wickedness of the sodomite, which today impacts upon the Christians as did their behaviour on Lot: “ . . . . just Lot, vexed with the filthy conversation of the wicked: (For that righteous man dwelling among them, in seeing and hearing, vexed his righteous soul from day to day with their unlawful deeds;)” (2 Peter 2:7-), will yet grow more intolerable. It will continue to do so until the ‘longsuffering God, can tolerate it no more and visits that defiled camp with His swift judgment and wrath!

That is a day we should ever keep before our eyes, irrespective of how the sodomite community seeks to blind themselves to it. To us it is a day of deliverance and therefore we look for it with joy, whereas, for the sodomite, it is a day from which, like the forces of Antichrist in  the day they meet with judgment, they would rather blind their eyes.

“And I beheld when he had opened the sixth seal, and, lo, there was a great earthquake; and the sun became black as sackcloth of hair, and the moon became as blood; and the stars of heaven fell unto the earth, even as a fig tree casteth her untimely figs, when she is shaken of a mighty wind. And the heaven departed as a scroll when it is rolled together; and every mountain and island were moved out of their places. And the kings of the earth, and the great men, and the rich men, and the chief captains, and the mighty men, and every bondman, and every free man, hid themselves in the dens and in the rocks of the mountains; and said to the mountains and rocks, Fall on us, and hide us from the face of him that sitteth on the throne, and from the wrath of the Lamb: for the great day of his wrath is come; and who shall be able to stand?” Revelation 6:12-17.

To engage in such sin is utter folly but to blind oneself to the eternal consequences of such sin, is a madness without boundaries.