A Presbyterian minister and a Catholic priest from Belfast have met Pope Francis in Rome. Rev Steve Stockman and ‘Fr’ Martin Magill were part of a delegation from Belfast which met the Pope at the Apostolic Palace at the Vatican. 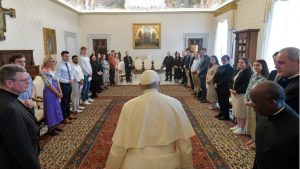 They were invited in their role as organisers of an annual cross-community festival which is this year celebrating its 10th anniversary.

A BIBLICAL AND CONFESSIONAL RESPONSE TO REV. STEVEN STOCKMAN

Presbyterian minister Rev. Steven Stockman is minister of Fitzroy Presbyterian Church, a church that has for many years been in the forefront of promoting a ‘peace process collaboration’ with Clonard Monastery in West Belfast. Stockman and local priest, Martin Magill, have been organisers of an annual cross-community festival for the past ten years. In January this year the Pope sent a video message praising Magill and Stockman for their ecumenical activity. Subsequently, the two men were part of a delegation from Belfast which travelled to Rome to meet the Pope at the Apostolic Palace at the Vatican.

Concerning the meeting at the Vatican, Stockman wrote, “I have no doubts that many in my denomination and other Protestants will call me a heretic.” He further stated, “From what I have read and heard about Pope Francis, I see him as a fellow follower of Jesus.” This telling statement reveals that Steve Stockman regards the present Pope as a “follower of Jesus”. However, he would do well to ascertain which ‘Jesus’ it is to whom he refers.

Pope Francis is the head of a religious system, which continues to reject the Jesus of the New Testament. In statement 969 of The Catechism of the Catholic Church 1994, Mary is presented as a mediatrix, in direct contradiction of 1 Timothy 2:5 which teaches that there is, “…one mediator between God and men, the man Christ Jesus.” Furthermore, the Pope claims to be the Vicar of Christ and the head of the church, however Scripture declares, that Christ alone is the Head of His Church (Ephesians 5:23, Colossians 1:18).

Thus, in the light of the dogmas of Rome, Pope Francis is a blasphemer of the Lord Jesus Christ and is the promoter of another gospel. Steve Stockman has abandoned the Scriptures and the confessional teaching of his own denomination, which states, “There is no other head of the Church but the Lord Jesus Christ. Nor can the Pope of Rome, in any sense, be head thereof; but is that Antichrist, that man of sin, and son of perdition, that exalts himself, in the Church, against Christ and all that is called God.” (Westminster Confession of Faith 1646, Chapter 25). Therefore, since Steve Stockman openly declares that he and the Pope are fellow followers of Jesus – but not the Jesus of Scripture – he has set up the platform upon which he is to be rightly charged with heresy.

Letter to ‘Belfast Newsletter’ regarding visit to pope

It is my sincere hope that the Protestant people belonging to the three main Protestant churches here will have carefully considered the recent reports of the visit by the minister of Fitzroy Presbyterian Church one, Rev Steve Stockman, to see the Pope and what it was he said of the head of the Roman Catholic organisation.

Rev Stockman is quoted as saying of the Pope that “he has a Christlikeness”. Nothing sets forth more clearly the utter about-face of Irish Presbyterianism than this statement.

Until comparatively recently, the PCI believed for centuries that to the popes of Rome belonged the title: “That Antichrist, that man of sin, and son of perdition, that exalts himself, in the Church, against Christ and all that is called God.” (Westminster Confession of Faith 1646, Chapter 25).

Now we are told that “he has a Christlikeness”. Both definitions cannot be true!

If Rev Stockman is not speaking on behalf of the majority in his denomination then we can expect that he will be tried on a charge of heresy, of which he himself has said some Presbyterians will consider him guilty.

‘Fr’ Martin Magill is a poor ‘beguiled’ Romanist who believes all that the Papacy claims for itself! Therefore we are not surprised at his words. He is the parish priest at St John’s Church on the Falls Road in west Belfast, and he is reported as saying: “Pope Francis did talk about ecumenism, Christians being together, working together, praying together, being friendly together. It was lovely to hear Christians being together in a world that so fractured and at pain at this time,” he added.

On the other hand, ‘Rev’ Steve Stockman of the infamous Fitzroy Presbyterian Church, rightly said: “I have no doubts that many in my denomination and other Protestants will call me a heretic.” Yes, and many more further afield will do so with greater conviction!

The Presbyterian Church in Ireland once believed what the Westminster Confession of Faith has to say about the Pope but removed that section as no longer part of their belief.

He is a beguiler of his fellow Presbyterians foolish enough to follow his lead!

Here is what the historic Confession says of the Pope. “There is no other head of the Church, but the Lord Jesus Christ; nor can the Pope of Rome, in any sense, be head thereof; but is that Antichrist, that man of sin, and son of perdition, that exalteth himself, in the Church against Christ and all that is called God.” Chapter 25, paragraph 6.

‘Rev’ Steve Stockman is quoted as declaring that which is very different from the position and teaching of the Westminster Confession of Faith. “From what I have read and heard about Pope Francis I see him as a fellow follower of Jesus. I am particularly drawn to his humility and efforts to live outside the ostentatious ways of the Vatican.” In placing himself as ‘a fellow follower of Jesus’ with the Pope, the stupid man places himself in the company of one rightly termed ‘an antichrist’!

I would believe and accept this definition of himself by Steve Stockman!!!