“A wonderful and horrible thing is committed in the land; the prophets prophesy falsely, and the priests bear rule by their means;

and my people love [to have it] so: and what will ye do in the end thereof?”

Three items of news press upon the Christian the extent of our nation’s rebellion against God.

The first is the report on the BBC news site with the headline: “Gay couple receive landmark Church in Wales blessing”. 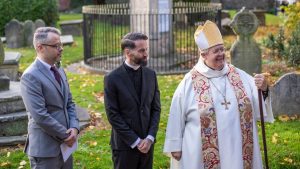 As may be seen in the above picture, one is a ‘cleric’. He is a former ‘bar man’ who is originally from Bolton and is now the ‘vicar’ at St Collen’s Church in Llangollen, North Wales. He and his ‘partner’, Fabiano Da Silva Duarte, have become what is thought to be the first same-sex couple to be officially blessed by the Church in Wales.

What a farce it is for a mere man,  (irrespective of his size and his ecclesiastical standing) to pronounce a blessing upon that which God has cursed!

Surely this illustrates for us just how far the nation has drifted and has turned its back upon God.

The curse of God rests not only on those directly involved in this abominable display of defiance of God and His truth but also upon all who permit themselves to remain in union with this organisation which sanctioned such an event.

But the apostasy of Anglicanism was further evidenced in the last day or so.

The following headline appeared in the ‘Daily Express’ of Saturday, 13th November, 2021.

How can Justin Welby doubt God and keep his job?

The article contained some telling observations from the writer, Richard Madeley, a man who has no links, to my knowledge, to evangelical Christianity. 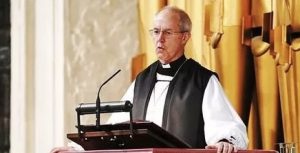 The Archbishop of Canterbury is openly admitting to sometimes doubting God’s existence!

“Today we have an Archbishop of Canterbury who is on record as openly admitting to sometimes doubting God’s existence, saying to Him during an early morning run: ‘Isn’t it about time you DID something if you’re there?’

Hmm. Hard to imagine Welby keeping his job 50 years ago if he’d said that.”

“In the same interview, he said he was certain, however, about the existence of Jesus. Hardly a leap of faith, is it? Jesus is a documented historical figure, every bit as real as Pontius Pilate, the Roman governor who washed his hands of him. The real question is, was Jesus the son of God? Because if you don’t believe in the Almighty, how can you believe Christ was His child?”

This final observation by Richard Madeley, requires neither faith in the Bible or theological training! It is but the outcome of common sense.

Sadly, very few in the Church of England will exercise the same ‘common sense’ and see that this man Welby is a religious charlatan and no fit ’shepherd’ to be followed.

The spirit that rests upon Welby with His doubting of the existence of God rests also upon all those within the Church of England who find such pontifications acceptable. Furthermore, this spirit of apostasy rests upon all who are happy to remain in the Anglican Communion (and here I specifically refer to the Church of Ireland) under the spiritual leadership of this ‘Judas’!

The text at the head of this article refers to a time when just such sentiments as voiced by Welby were heard in Judah. It was a time of utter rejection of the truth of God.

It was also a time which was swiftly followed by the judgment of God upon the land!

Approximately 12-13 years after Jeremiah wrote the words of our text, the following took place.

“Zedekiah [was] one and twenty years old when he began to reign, and he reigned eleven years in Jerusalem. And his mother’s name [was] Hamutal the daughter of Jeremiah of Libnah. And he did [that which was] evil in the eyes of the LORD, according to all that Jehoiakim had done. For through the anger of the LORD it came to pass in Jerusalem and Judah, till he had cast them out from his presence, that Zedekiah rebelled against the king of Babylon.

And it came to pass in the ninth year of his reign, in the tenth month, in the tenth [day] of the month, [that] Nebuchadrezzar king of Babylon came, he and all his army, against Jerusalem, and pitched against it, and built forts against it round about. So the city was besieged unto the eleventh year of king Zedekiah.

And in the fourth month, in the ninth [day] of the month, the famine was sore in the city, so that there was no bread for the people of the land. Then the city was broken up, and all the men of war fled, and went forth out of the city by night by the way of the gate between the two walls, which [was] by the king’s garden; (now the Chaldeans [were] by the city round about:) and they went by the way of the plain. But the army of the Chaldeans pursued after the king, and overtook Zedekiah in the plains of Jericho; and all his army was scattered from him.

Now in the fifth month, in the tenth [day] of the month, which [was] the nineteenth year of Nebuchadrezzar king of Babylon, came Nebuzaradan, captain of the guard, [which] served the king of Babylon, into Jerusalem, And burned the house of the LORD, and the king’s house; and all the houses of Jerusalem, and all the houses of the great [men], burned he with fire,” Jeremiah 52:1-13.

The last thing that the wicked king Zedekiah saw was his sons being slain. After that he was blinded by the Babylonians.

Children will be the victims of the apostasy today! Being raised in darkness they will sadly inherit the “the blackness of darkness for ever,” Jude 1:13.

Evidence of the dreadful darkness into which the children of the United Kingdom are being ushered is illustrated by this news headline from some months ago. “Scotland will let pupils change gender aged FOUR without their parents’ consent — and tells teachers not to question a child’s request to choose a new name or use a different toilet”.

That was reported in the Daily Mail of August 12th of this year.

No comment can be made on such a wickedness other than one of utter condemnation of the reprobate, Scottish education secretary, Shirley-Anne Somerville,  behind such wickedness. This woman of unbelievable imbecility states of this action: ‘This guidance outlines how schools can support transgender young people while ensuring that the rights of all pupils are fully respected.’ 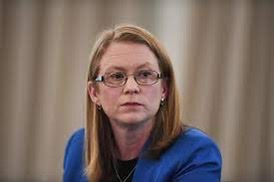 There will be those aghast at such a decision. But what have they done? What have they said since August 12th? It would appear to me that little if anything has been done to overthrow this abominable folly!

Likewise, there will be little by way of an effective and forthright response to the other two events mentioned in this article.

The world laughs and drinks and dances on as it sinks down into eternal oblivion!

The environment of Sodom and Gomorrah advances fast within society and that is but a herald of the damning fate that will follow, even that which overtook those wicked cities.

How relevant are the words of the Saviour today.

“And as it was in the days of Noe, so shall it be also in the days of the Son of man. They did eat, they drank, they married wives, they were given in marriage, until the day that Noe entered into the ark, and the flood came, and destroyed them all.

Likewise also as it was in the days of Lot; they did eat, they drank, they bought, they sold, they planted, they builded; But the same day that Lot went out of Sodom it rained fire and brimstone from heaven, and destroyed [them] all.