The editor replies to a letter which was published in today’s ‘Belfast Newsletter’. 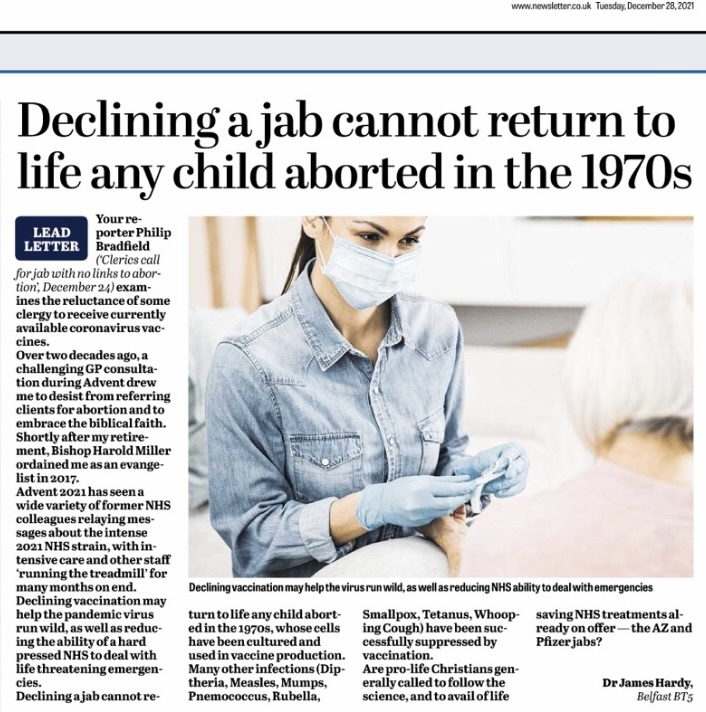 That is true, as true as the fact that punishing one who murdered a person or refusing to support the Sinn Fein Party, who politically benefitted from the murder of hundreds of innocent people, Roman Catholic and Protestant in recent times, will not bring back those slain, but yet the moral force behind such retaliatory views, based upon God’s Law (Genesis 9:6, Matthew 19:18) persuades thousands of people, Roman Catholic and Protestant, to embrace them as morally correct.

The use of foetal material in a whole range of drugs may be a ‘glib fact’ for Dr Hardy, but I am sure that many, on learning that which has been kept secret from the public, will shudder that society has sunk to these depths of depravity!

How can we believe that safeguarding our health at the cost of the sacrificing, murdering of the innocent unborn can be morally justified and that it is not something that the ‘Judge of all the earth’ will not demand of mankind, including such advocates and defenders of such wickedness as Dr Hardy, an account.

Abortion is murder and the abortion of the unborn for use in the development of drugs and vaccines is unspeakably wicked. I would rather die of a disease than be guilty of WILFULLY AND KNOWINGLY avail myself of a vaccine that was born of the murder of an unborn innocent child.

“Blessed [are] they that do his commandments, that they may have right to the tree of life, and may enter in through the gates into the city. For without [are] dogs, and sorcerers, and whoremongers, and murderers, and idolaters, and whosoever loveth and maketh a lie,” Revelation 22:14-15.