We should heed God’s Word when it tells us: “‭Boast‭‭ not thyself of to morrow‭; for thou knowest‭‭ not what a day‭ may bring forth‭‭,” Proverbs 27:1.

This day has brought untold tragedy and suffering to the people of Ukraine.
Here are a few thoughts on the events that are such that we have little idea of what the final outcome may be!

Sincerely in the Saviour’s name,

“And ye shall hear of wars and rumours (reports) of wars: see that ye be not troubled: for all these things must come to pass, but the end is not yet, ” Matthew 24:6.

Today, the world has proof that the Russian leader, Vladimir Putin, is, above all, a liar. After repeatedly saying that he had no plans to invade Ukraine and that such an idea was a Western invention, he has attacked Ukraine with a rising death rate within minutes of the invasion. The scope of the Russian attack appears to be massive. Ukraine’s interior ministry reported that the country was under attack from cruise and ballistic missiles, with Russia appearing to target infrastructure near major cities such as Kyiv, Kharkiv, Mariupol and Dnipro.

Putin today has Ukrainian blood on his hands, adding to that spilt by his forces in the 2014 invasion. 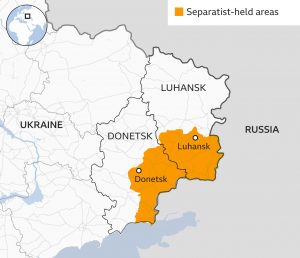 Since 2014, Russian-backed separatists and Ukraine’s armed forces have been fighting a war in the eastern regions of Donetsk and Luhansk in which more than 14,000 people have died.

The event has also exposed Putin as a delusional megalomaniac. He claims that his armed forces are going to ‘de-Nazify’ Ukraine. To do that, he adopts the methods of the Nazi demagogue, Adolf Hitler.

Hitler, as has Putin, created utterly fallacious circumstances by which he felt justified in his invasion of Poland in September 1939. That invasion ignited World War II and brought about the deaths of millions of civilians and soldiers and the utter ruin of much of the UK and  mainland Europe, Russia, Japan and the Far East!

Here is a headline outlining the latest events:

If we have a ‘new Hitler’, sadly we also have the voices of the modern version of ‘Neville Chamberlain’!

The response of the leaders of the Untied Nations of Nato, the North Atlantic Treaty Organic, has been loud! If words could accomplish anything, Putin is in for a swift defeat.

Sadly, that will not be the case. What financial measure that have been taken by the West will, at the least, take quite awhile to have any real impact upon the economy of Russia. By the time they do, Russia will like have destroyed the ability of much smaller Ukraine to continue resistance.

For Christians we should see in this all the escalating instability amongst the nations and the growing disregard of God and His Law. The Gospel brought stability to those nations that felt something of its power.

“When the righteous are in authority, the people rejoice: but when the wicked beareth rule, the people mourn,” Proverbs 29:2. The ‘rejoicing’ is the fruit of a sense of security, prospective prosperity and safety for the whole family.

As the verse says, when the wicked take control the mood of the nation changes radically.

Are we not seeing something of this in our United Kingdom?

Murder on the streets, the slaughter of the unborn in our hospitals, the abuse and murder of infants at home, the dangers females face every day, the elevating and sanctioning of every form of perversion. All this are the ingredients that produce ‘mourning’! The word means ‘groaning, gasping’ in pain and distress. 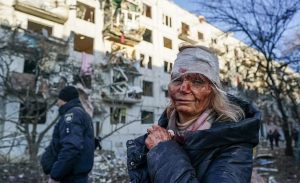 One of a number of victims injured by Putin’s ‘brave’ soldiers as they attacked an apartment building with missiles. 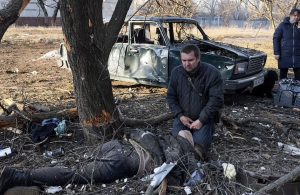 In the eastern Ukrainian town of Chuguiv, a son wept over the body of his father among the wreckage of a missile strike in a residential district.  ‘I told him to leave,’  the man sobbed repeatedly, next to the twisted ruins of a car

In closing let me share a few words from two missionaries in Ukraine who are from Ulster. The full letter they sent home was shared with me but in case I might endanger them, I will quote only a short portion of the communication.

“This is quite possibly our last means of correspondence for some time. War is imminent and the consequences dreadful. A state of emergency has been declared and this will be followed by martial law. Young Ukrainian men from 16 years of age are being called up to serve in the military and Ukrainians are being given the right to carry arms. A major cyberattack is happening just now as we write which has affected Ukrainian banks as well as government websites. Ukrainian citizens are being asked to urgently leave Russia and our local currency is in free fall.  . . . R. . .  and I are not leaving – How can we? As an elder in the assembly, my responsibility is to shepherd at all times. It would be a terrible testimony to get up and leave the . . . .  believers. We have been preparing for this day.”

Please pray for the Lord’s people in Ukraine. And remember to “Pray for the peace of Jerusalem,” Psalms 122:6.

Who knows what opportunities to attack Israel will be seen by her enemies in the possible escalation of the violence in Ukraine.