I am sending this letter to the ‘Belfast Telegraph’ sadly, with the expectation it may well never appear.

It brings lasting shame upon the ‘Belfast Telegraph’ that it should publish the wicked blasphemies of Gareth Hanna as are contained in his article ‘Street preachers’ Good News is nothing of the sort’, published in today’s edition.

The shame is increased in that he is likely paid by the newspaper to write such words in defiance of God’s truth.

Under the guise of criticising the follies of some ill-advised street preaching, he attacks the Word of God. The Lord Jesus Christ, said: “He that believeth on the Son hath everlasting life: and he that believeth not the Son shall not see life; but the wrath of God abideth on him,” John 3:36. 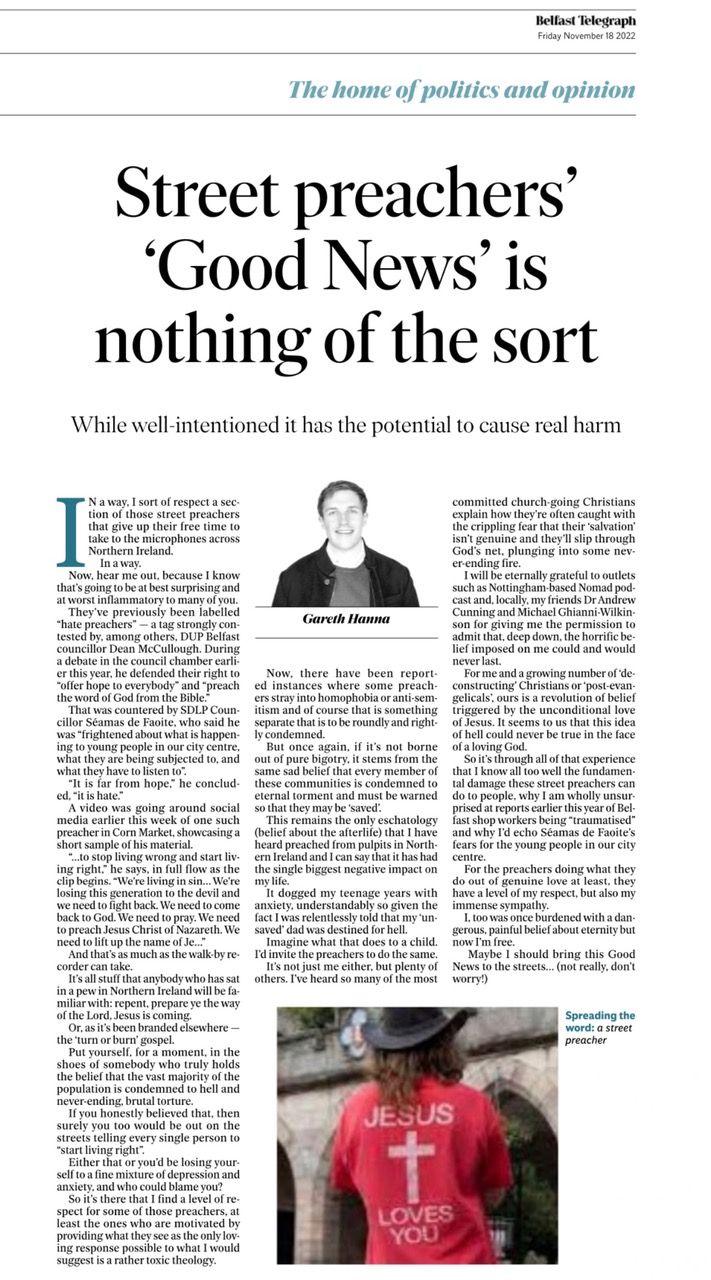 Thus, He plainly states that the consequences of rejecting the Bible’s message is ‘abiding wrath’! The Gospel does indeed tell men, putting it in in simple terms, that they must ‘turn or burn’, something Hanna mocks and calls ‘toxic theology’!

Do not such verses as these teach this very truth?

“Yet if thou warn the wicked, and he turn not from his wickedness, nor from his wicked way, he shall die in his iniquity; but thou hast delivered thy soul,” Ezekiel 3:19.

“And to you who are troubled rest with us, when the Lord Jesus shall be revealed from heaven with his mighty angels, in flaming fire taking vengeance on them that know not God, and that obey not the gospel of our Lord Jesus Christ: who shall be punished with everlasting destruction from the presence of the Lord, and from the glory of his power; when he shall come to be glorified in his saints, and to be admired in all them that believe (because our testimony among you was believed) in that day,” 2 Thessalonians 1:7-10.

“For if we sin wilfully after that we have received the knowledge of the truth, there remaineth no more sacrifice for sins, but a certain fearful looking for of judgment and fiery indignation, which shall devour the adversaries. He that despised Moses’ law died without mercy under two or three witnesses: of how much sorer punishment, suppose ye, shall he be thought worthy, who hath trodden under foot the Son of God, and hath counted the blood of the covenant, wherewith he was sanctified, an unholy thing, and hath done despite unto the Spirit of grace? For we know him that hath said, Vengeance belongeth unto me, I will recompense, saith the Lord. And again, The Lord shall judge his people. It is a fearful thing to fall into the hands of the living God,” Hebrews 10:26-31.

These verses more than answer the fatuous ravings of one given over to the eternal folly of mocking and defying God.