I cannot forbear drawing this matter, which I have just become aware of, to your attention that you might make it a matter of prayer and protest, if you live in the area mentioned.

This BBC headline is most shameful and indicates how ‘politically correctness’ has taken the place of the commands of God as the rule of life and behaviour.

As you read this report you will see that in truth, God is not allowed to speak in this land! His voice and Word is not to be tolerated.

The report tells us that the scripture on the town’s seawall was last written in 2018 and that a new request to repaint the verses was received by a committee of Causeway Coast and Glens Borough Council in May. However, behind a ‘closed-doors’ meeting last month, a diversity consultant recommended that councillors review their decision. 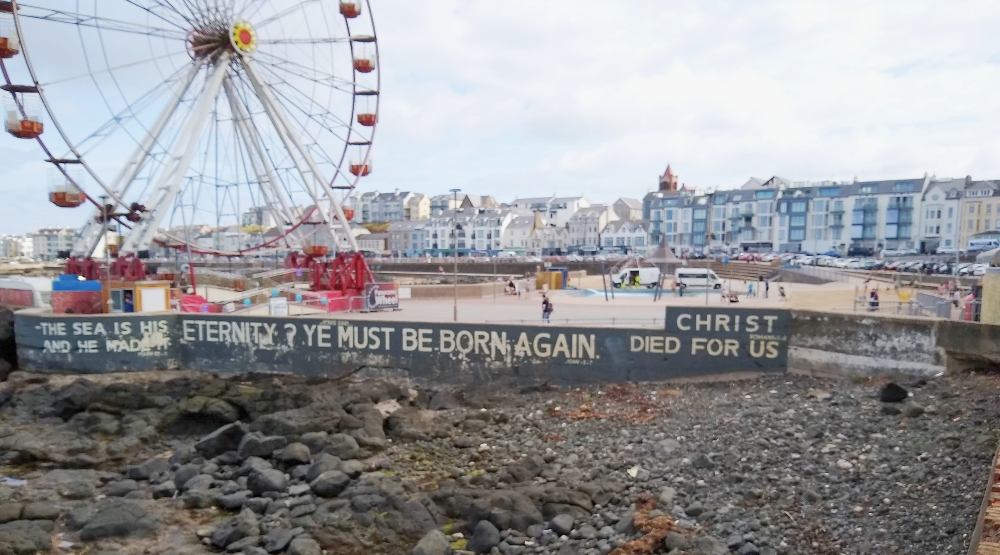 The reason why the Word of God, painted on the seawall, should not be repainted is given in the minutes from the land and property sub-committee. They show that members were advised by the expert that the “council may be viewed as being in breach of its equality scheme” if they approved the request!!

This ‘expert’ is ignorant that the Lord “ . . . now commandeth all men every where to repent,” Acts 17:30, and would have that message displayed and declared wherever possible!

Apparently, there is an ‘equality scheme’ in force in Northern Ireland that is above and superior in authority to the Word of God!

It is little wonder we are in the state of chronic confusion and corruption that we are.

We welcome the fact tht two councillors, DUP members Alan McLean and Alderman Mark Fielding, voted against the ‘expert’s’ recomendation. However, four other councillors voted in favour of it. It would be interesting to know which political parties they belonged to!

The committee agreed to carry out an equality screening process and public consultation before making any decision. The matter now has to go before the full council.

This is a case of the liberal, modernistic theology which invaded the pulpits of the mainline churches decades ago, now dominating the education and legislative systems which produced such schemes and ‘experts’

We are reaping the harvest of the evangelical compromise and retreat in the face of this invasion and that harvest has yet to come to its fulness.

We live, it appears, in an Ulster which will not, cannot allow God’s voice to be heard!

Shame on us for ever allowing such a state of affairs to have come about.

The News Letter has also published a letter by Mr. Samuel Morrison regarding this issue:

Biblical scripts fall foul of equality experts in Northern Ireland, but shrines to terrorism do not

Sincerely in Christ’s cause,