A roadside service to remember the victims of the Kingmills massacre has taken place in south Armagh.

Ten Protestant workmen were gunned down after being forced off their minibus by an IRA gang on January 5, 1976.

The only Catholic in the vehicle was ordered to flee the area before the gunmen shot the workers with an array of automatic weapons.

One man survived the attack despite being shot 18 times. 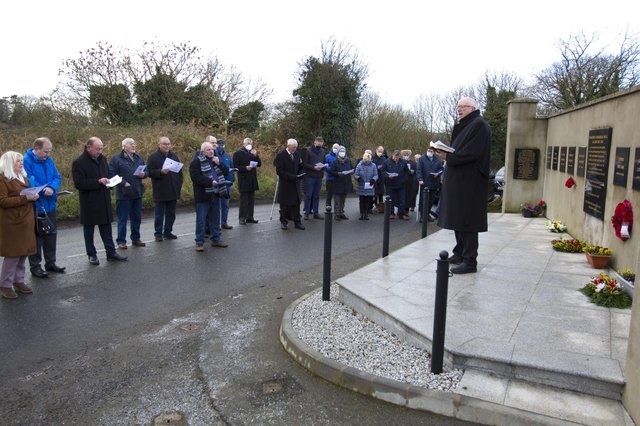 in memory of those murdered in the Kingsmills Massacre on the 5th January 1976. Pacemaker Belfast

Around 30 people gathered at the scene of the atrocity for a commemoration service – organised by victims’ group FAIR (Families Acting for Innocent Relatives) – on Wednesday morning, January 5th, 2022.

Aileen Quinton and Brian Johnson laid a wreath on behalf of the South East Fermanagh Foundation at the Kingsmills commemoration.

Former Ulster Unionist MLA and NI Executive minister Danny Kennedy has lived in the area all his life.

He attended yesterday’s service and described it as a “poignant” reminder.

“It was a nice service, conducted by the Rev Graham Middleton from Tullyvallen Free Presbyterian” he said.

“He conducted a short service and an act of remembrance. It is the 46th anniversary and it was as poignant as it was in all previous years, when we think of the families and the sole survivor Alan Black.

“I think it is generally important that people do remember an atrocity like Kingsmills, because of the impact that it had, and continues to have, on lives in this area.

“It is crucial that a younger generation remembers the events of January 1976,” Mr Kennedy added.

Alan Black, now aged 77, was left for dead at the roadside but survived against all odds.

In a Facebook post afterwards, the DUP representative said: “A solemn remembrance service at Kingsmill this morning.

“The passage of time has not nor cannot diminish the horror that was visited by the IRA on those ten innocent men and their families.

“As the memorial tablet stone scripture verse states: ‘The Lord hates ‘hands that shed innocent blood. Proverbs 6v17’. I continue to remember the families at this time.”

No one has ever been convicted for what was one of the most shocking terrorist outrages committed during the Troubles.

The SEFF victims’ group said: “The Kingsmills attack was amongst the most barbaric sectarian and ethnic motivated crimes to have taken place in the Troubles”.