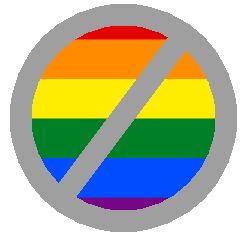 Sodomy is a wickedness spawned in hell and hated of God.

“Thou shalt not lie with mankind, as with womankind: it is abomination {hateful, disgusting thing},” Leviticus 18:22.

Furthermore, the Saviour has revealed that the proliferation of this wickedness is a sign of the approach of His return.

“And as it was in the days of Noe, so shall it be also in the days of the Son of man. They did eat, they drank, they married wives, they were given in marriage, until the day that Noe entered into the ark, and the flood came, and destroyed them all. Likewise also as it was in the days of Lot; they did eat, they drank, they bought, they sold, they planted, they builded; but the same day that Lot went out of Sodom it rained fire and brimstone from heaven, and destroyed them all. Even thus shall it be in the day when the Son of man is revealed,” Luke 17:26-30.

God’s faithful people should be preparing their hearts and life’s for that glorious day. “Therefore be ye also ready: for in such an hour as ye think not the Son of man cometh. . . . . the bridegroom came; and they that were ready went in with him to the marriage: and the door was shut,” Matthew 24:44, 25:10.

We would urge Christians to sign this particular petition.

AN APPEAL FROM ‘CHRISTIAN VOICE’

“There is a campaign building to pressurise countries in the developing world to legalise sodomy and same-sex marriage. British diver Tom Daley is leading the campaign and the Commonwealth Games in Birmingham joined in with a ‘woke’ opening ceremony.

We have started a Petition: ‘Developing Nations Stand Against Sodomy!’

Please sign the petition here and join the resistance to ungodly measures and Western immorality!”

Deut 8:6 Therefore thou shalt keep the commandments of the LORD thy God, to walk in his ways, and to fear him. (KJV)

Yours in the mighty name of the Lord Jesus Christ,