My wife and I are both laid aside with the Covid virus, though we are hoping that we are coming near to a measure of recovery. It has been an unpleasant few days and likely this will continue for some time yet.

Because of the infection, I cannot minister in Kilskeery Independent Christian School. Instead, I am sending out this little study which I prepared just a day or so ago.

I trust you find instruction for your soul and that which causes you to rejoice in the kindness of God to you for delivering you from rebellion and sin and bringing you in faith to Christ Jesus. 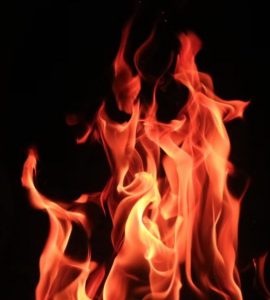 It is quite commonly believed that the rejector of the gospel of Christ will learn of his folly when death comes and he goes out into a Christless eternity.

However, what the Bible teaches on the matter indicates that such a view might be just overstating the truth a little.

In life we are often aware of how those who refuse to take heed to wise counsel are suddenly overtaken by the consequences of their folly and made to see just how wrong was their heedlessness in the past. So it was with the Prodigal Son. He learned that the guidance offered by his father was much wiser than the headstrong views he had formed and upon which he acted to his ruin and grief.

It is easy from the awakenings to the folly many have pursued and their seeing of the blindness of their minds to the wisdom they rejected, to assume that it would be like that for those who tragically end in hell.

I don’t think that there will be such an awakening in hell to a knowledge of the lunacy of the path the damned choose!

I think a little consideration of the Saviour’s Words in Luke 16:19-31 will answer the question which is the title of this article.

1. LET US BEGIN BY CONSIDERING WHAT THE SINNER WILL LEARN IN ETERNITY.

The sinner will learn that there is a hell!

“And in hell he lift up his eyes, being in torments,” verse 23. Whatever he may or may not have believed about this subject he now is fully aware that hell exists!

Furthermore, he realises that it is a place of torment and pain and suffering. Real suffering, the suffering of flaming fire.  “I am tormented in this flame,” verse 24. The notions of the sceptic and unbeliever have no place in hell. The arguments and speculation about whether a ‘spiritual’ entity can feel the pain inflicted by flames will cease to be. This man, now a spirit without a body is suffering torments in the flames of hell.

Again he will learn that he is eternally separated from those who had experienced the saving mercy of God in their lifetimes. “But Abraham said, Son, remember that thou in thy lifetime receivedst thy good things, and likewise Lazarus evil things: but now he is comforted, and thou art tormented. And beside all this, between us and you there is a great gulf fixed: so that they which would pass from hence to you cannot; neither can they pass to us, that would come from thence,” Luke 16:25-26.

I am sure that this man found himself where he did not expect to be. As a Jew he expected to spend eternity in the company of godly Abraham in the midst of the bliss prepared of God for all the holy ones.

Whatever eternal expectations he had, he has learned that they were baseless and without foundation.

Oh how many like him are today journeying to an eternity of disappointment, disenchantment and distress.

Heeding only the fond notions that spring from the foolishness of rejecting the Bible and embracing the deceits of their own hearts, they find themselves forever cast amidst the ruins of false hopes.

“There is a way which seemeth right unto a man, but the end thereof are the ways of death,” Proverbs 14:12.

These then are some of the lessons the sinner will learn in hell. However, he will not benefit from such learning. Whereas, had he fully and heartily learned these truths while he was yet alive, he could have benefitted greatly, immeasurably so. Learning from them he would have escaped the damnation he now is eternally destined to endure!

2. BUT LET US NOW SEE THE IGNORANCE THAT THIS MAN WAS STILL IN.

When we examine the exchange he has with Abraham, we see the ignorance that being damned has not dispelled.

The most important thing we learn is the man is still in ignorance regarding how the soul is saved! He is aware of the fact that his brothers are on the same path that he took which brought him to hell.

“Then he said, I pray thee therefore, father, that thou wouldest send him to my father’s house: for I have five brethren; that he may testify unto them, lest they also come into this place of torment,” 27-28. He petitions Abraham and in this he is showing his ignorance of God’s way of grace and mercy. It is through Christ and no other. “For there is one God, and one mediator between God and men, the man Christ Jesus,” 1 Timothy 2:5.

He is still totally ignorant of the workings of God’s grace in the heart that gives repentance. “In meekness instructing those that oppose themselves; if God peradventure will give them repentance to the acknowledging of the truth,” 2 Timothy 2:25. Like all men, he still thinks that such a supernatural thing as the returning of one from the dead will work faith and repentance. Not so, says Abraham. “Abraham saith unto him, They have Moses and the prophets; let them hear them. And he said, Nay, father Abraham: but if one went unto them from the dead, they will repent. And he said unto him, If they hear not Moses and the prophets, neither will they be persuaded, though one rose from the dead,” Luke 16:29-31. Note his readiness to argue with Abraham, dispute with him as to the proper and most effective of convincing sinners! His mind is unenlightened in the ways of God’s grace.

I believe that this darkness and ignorance and the dreadful perplexity that must arise from it are part of the dreadful horrors that produce the eternal  “weeping and gnashing of teeth,” Matthew 8:12. Surely these words depict a spirit of extreme chagrin and aggravation! How did I arrive here, seems to be the spirit behind this extreme outburst? Hell is a place where sinners abide forever in a state of extreme disgruntlement!

Notice also that the rich man was in utter ignorance of the fact that he could not obtain some relief from his torments. “And he cried and said, Father Abraham, have mercy on me, and send Lazarus, that he may dip the tip of his finger in water, and cool my tongue; for I am tormented in this flame. But Abraham said, Son, remember that thou in thy lifetime receivedst thy good things, and likewise Lazarus evil things: but now he is comforted, and thou art tormented. And beside all this, between us and you there is a great gulf fixed: so that they which would pass from hence to you cannot; neither can they pass to us, that would come from thence,” Luke 16:24-26.

Many foolishly think that there are means of relief from hell’s torments. How wrong they are!

These words persuade me to embrace the view of a ‘divided Hades’ in the period before the resurrection of Christ at which time He took the redeemed out of ‘paradise’ to heaven with him, leaving the unregenerate in hell.

The darkness that blinds the minds of sinners to the way of salvation will continue in eternity and manifest itself in a spirit of bewilderment regarding how it is they ended in this torment and an eternally frustrated hope of relief.

I believe these things we may rightly learn from the words of the Saviour in this passage and recognise the dreadful darkness and eternal confusion that unremittingly will rest upon lost souls.

Truly, we have little concept of just what awaits the lost soul in God’s hell!