As of 30th May, 2017, I have requested that SermonAudio close my account. I am not sure just when the closure will take place as that is in the hands of SermonAudio. However, I will no longer mount sermons there. Instead, my own website The Burning Bush will now house all my sermons. It has long been the home of my articles and news links. Gradually we will mount the 1376 messages I had on SermonAudio on my own site.

I think that I am correct in saying that our sermons were among the first that were mounted on SermonAudio when Mr. Steven Lee opened his exciting new venture. I recall him heading off home to the United Sates with a large box of old cassette recordings of early sermons preached by me here in Kilskeery, many hundreds of which have been downloaded over the years. I am ever mindful of the introduction SermonAudio gave me to a multitude of believers across the world. Read more…

Appeal court ruled that abortion law in Northern Ireland should be left to the Stormont Assembly and not judges. Political manoeuvring at Westminster soon cut short the rejoicing over this decision!!

Chancellor: Government to fund abortions in England for women from Northern Ireland

It is clear that the DUP’s “moral position” on abortion has not in the least influenced the British Government. Are professing Christians in Stormont happy with the murder of the unborn being the price of the financial benefits obtained from the UK Prime Minister.

The Visions of the Judgment of the Nations around Israel (Ammon, Moab, Edom, Philistia, Tyrus)

Preached at a meeting of the Sovereign Grace Advent Testimony in London, June 23 2017, By Rev Ivan Foster

These 4 chapters detail the judgments of God which befell the nations around Israel at the hand of Babylon back some 2600 years ago.

Three of the chapters deal with Tyrus. I believe that what is here read is a picture, a foreshadowing of the future judgments of God against the Antichrist and his allies.

Man is unchanging in his spiritual disposition and constitution.

Contrary to the Evolutionist’s silly notion that man is on an upward moral path, in truth man is ever on the sinful, depraved downward path. It is only by God’s constraining providence that mankind has not long ago plunged into unspeakable depths of universal darkness and the damnation that will follow.

No, man being the same he ever seeks out the same sinful paths as did his forefathers.
God being the same, and He is, “For I am the LORD, I change not,” Malachi 3:6, His response to sin has ever been the same.

When nations sin as nations have before, then the judgments that will follow such sin will again be as the judgments of the past.

The chapter 25 deals with the Ammonites, the Moabites, the Edomites and the Philistines. I do not intend examining each declaration of judgment against these nations for that would require more time than is available to us tonight.

I wish to highlight important features in these chapters. Read more…

Watch a video of this message here.

Some Cardinal Principles of Prophetic Interpretation 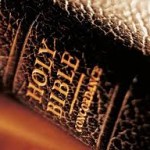 (This article is taken from the second issue of Watching and Waiting, May 1919).

2. Prophecies of events still future will be fulfilled on the same principle as those which have already come to pass. (The following prophecies concerning our Lord Jesus have been literally fulfilled: Micah 5:2; Isaiah 7:14; Isaiah 53:7-9; Psalm 16:8-11. The following prophecies will also be fulfilled literally: Zechariah 12:10; Zechariah 14:3-4; Matthew 24:29-31. Prophecies concerning Israel’s scattering have been fulfilled literally, so also will be the promises of regathering: Jeremiah 30:3; Jeremiah 31:7-10; Isaiah 14:1-3; Amos 9:14-15). Read more…

It is to be noted that the fact that this is a Roman Catholic controlled school is not immediately made clear in the report!! Read the Belfast Telegraph report here.

It was always a source of shame that soldiers from Northern Ireland serving in the British Army were not treated the same as soldiers from the other parts of the United Kingdom. read the Belfast Telegraph report here.

Popery is a system which has long spoken out of ‘both sides of its mouth’ and is ever engaged in preaching ‘the lie’ while calling it ‘the truth’ and thus deceiving millions about eternity !!!

Jeff Dudgeon: I have long battled with the DUP over gay rights, but I do not find them hostile now.

Something every Free Presbyterian supporter of the DUP should reads and note!!

Cash, not moral issues, likely to be driving force of DUP support for May

The price of power!!!

Talk about hypocrisy, Sinn Fein cosied up to DUP when it suited

Even after Enniskillen massacre, Corbyn and the hard left would not condemn the IRA

Corbyn went out on limb with Provos all the time, claims peer

What a disaster for the UK if this “useful idiot of the IRA”, as one RUC officer called him years ago, is elected Prime Minister and what a commentary on the wit of the people of England if he is their choice!!!

See also Labour’s wriggling over its past meetings with terrorists is enough to make your hair curl, no matter what Abbott says

‘Workmate led us to a slaughtering match’

“The sole survivor of the Kingsmills massacre says he is “horrified” that a workmate who usually travelled on the minibus ambushed by the IRA in south Armagh may have set them up to be murdered.”

This would not be the first time that such treachery was manifested. A young republican in Castlederg blew himself up fixing a bomb to the car of a workmate who had often shared his lunch with him!!