This is a headline on today’s BBC news site: “Covid: Greece to fine over-60s who refuse Covid-19 vaccine”.

I was sent the link late (for me) last evening by a dear brother who is alive to these issues. His comment accompanying the link was: “Morally wrong. It is like the return of the Nazi regime trying to force experimental medicine on people.”

The three versions of the vaccine are indeed ‘experimental’. That is all too obvious in the ongoing updating of the ‘experts’ expectations of the effectiveness of the ‘jab’ and the ever increasing dosage required for it to work!

All pharmaceutical companies in the past have been vigorously regulated in order to ensure that only drugs that have  been thoroughly tested were issued for public use. The Covid-19 ‘jabs’ however, have been marketed after a very short period of verification and I believe that the increasingly reported deaths and physical and mental repercussions that have followed vaccination, in the experience of some, suggest very clearly that the vaccines are indeed ‘experimental’!

These ‘anomalies’ are commonly circulated by word of mouth by those who claim that they have personal knowledge of such happenings amongst those with whom they are acquainted. Such reports are surely substantiated by the occasional media reports, which seem to be increasing in frequency, of people suffering serious ill-effects from the ‘jab’, even death itself! The NHS has mounted a statement on one of its webpages about ‘having a painful, heavy feeling and tenderness in the arm where you had your injection, headache or muscle ache, joint pain, chills, nausea or vomiting, feeling tired, fever (temperature above 37.8°C).

However, none of these ailments comes anywhere near what is reported as following the ‘jab’. Blood clotting, paralysis and even death are laid at the door of the vaccine! The Government has admitted that blood clotting has followed the ‘jab’ but they claim that the benefits far out weigh such results. I am sure those who have loved one who have suffered from these ‘abnormalities’ will find little comfort in that assurance!

Here is just one such report which I obtained by a simple ‘Google’ search.

Here is another headline:

“Norway Warns of Vaccination Risks for Sick Patients Over 80”

While there is the ‘lunatic fringe’ out there (the most notable being Piers Corbyn, brother of ‘Jeremy’) which propagates all sorts of ludicrous notions about vaccines per se, substantial evidence may be gathered to suggest that the three vaccines currently being pressed upon the public are not as safe as the ‘experts’ would have us believe.

Personally, I cannot believe that any medicine that has been produced through the use of tissue from an aborted baby can be in any way deemed safe. I believe that such a procedure will have the enmity of God directed against it and it cannot expect to succeed in its objectives!

The promise of blessing given to Joshua is not one that the vaccine manufacturers are likely to be eligible for!  “This book of the law shall not depart out of thy mouth; but thou shalt meditate therein day and night, that thou mayest observe to do according to all that is written therein: for then thou shalt make thy way prosperous, and then thou shalt have good success.” Joshua 1:8.

I must emphasise that the manufacturers of the three main vaccines have acknowledged the use of foetal material in the production of their vaccines.

On reading this news article of what lies in the future for the elderly in Greece, I thought to myself, “The spirit of Nebuchaddnezzar is not dead!” That spirit was ‘alive and active’ before the Babylonian dictator came along and it has survived his demise! Like the legion of devils, cast out of the man of Gadara and which entered into the herd of swine (Mark 5:8-13) they continued on in their career of death for a time and when they brought the herd to its death in the Sea of Galilee, they doubtless moved on to another ‘residence’!

That ‘spirit’ will be emerging on the world scene, within the borders of the old Roman Empire, in its fullest measure in the not too distant future.

What is planned in Greece, is but a forewarning of what will come to the UK, in one form or other.

The world will see, as it is plainly stated in the Bible, the taking away of fundamental freedoms like that, and more, proposed for the elderly, the section of society least able to resist, in Greece.

Heed this word from the Lord:

“But the end of all things is at hand: be ye therefore sober, and watch unto prayer.” 1Peter 4:7.

Please note this headline on the BBC news site:

The spirit of coercion is spreading!!

Here is that BBC report.

Greece is to make Covid vaccinations mandatory for people aged 60 and over.

Fines of €100 (£85) will be imposed at monthly intervals from mid-January on those who refuse, Prime Minister Kyriakos Mitsotakis said. “The money will go towards the Greek health system, which is struggling with a surge in hospital admissions.” 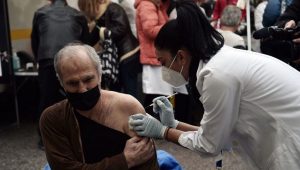 “Greeks over the age of 60… must book their appointment for a first jab by January 16,” the premier said in a statement to the cabinet. “Their vaccination is henceforth compulsory. The measure is still to be put to a parliamentary vote, he said, but lawmakers are widely expected to approve it.

While countries have made vaccines mandatory for health workers and other high-risk workers, Greece will become the first in the EU to target a specific age group.

Austria has announced that compulsory Covid vaccinations will start in February.

Mr Mitsotakis said the decision had “tortured” him but he felt a “heavy responsibility in standing next to those most vulnerable, even if it might fleetingly displease them”.

The virus has claimed more than 18,000 lives in Greece.