Below are two reports from today’s ‘Belfast Newsletter’, sent to me by a very good friend of our witness who I can’t say that I have ever met, one report being good and the other abominable.

The men who were arrested last August for preaching against sodomy and like perversion, in Larne, Co. Antrim, have been declared innocent of the charges brought by the police. This court decision follows a like decision regarding a similar charge brought against the same men in a Dundalk court in the Republic of Ireland. There the charge was likewise dismissed some days ago.

The only dissenter was a renegade papist priest, Pat Buckley who represents no one but his own perverted views.

A video of the arrest in Larne may be seen on the ‘Belfast Newsletter’ website. 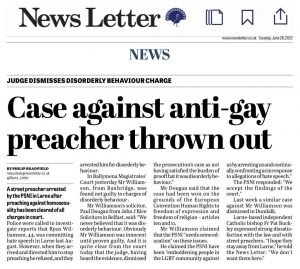 The other article reports the shameful wickedness of some members of the Presbyterian Church in Ireland who took part in a ‘Gay Pride’ parade in Dublin.

With smiling faces they defy God and His Word and shamelessly support that which God calls an abomination. There will be no smiling in eternity for those who persist in this rejoicing in sin!

P.S. — A very suitable verse from my Bible reading this morning!

“I beheld the transgressors, and was grieved; because they kept not thy word,” Psalm 119:158.