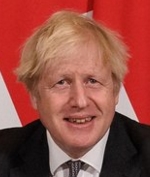 Ulster is to be visited today by one of the greatest deceivers and prevaricators that has ever filled the office of Prime Minister in London, Boris Johnston!

The deceit and chicanery surrounding the breaching of the Covid regulations by the Prime Minister and his staff is utterly shameful. It is but one of many examples of the unscrupulous behaviour of this man.

He is utterly amoral and unprincipled.

The ‘Belfast ‘Telegraph’ has published a lengthy statement this morning from him. As is to be expected, it is a lot of  mendacious ‘bletherings’, designed to distract and deceive. He lauds Sinn Fein, the armed wing of which, the IRA, murdered hundreds of English, Scots and Welsh soldiers and many mainland civilians.

We know the deaths of innocent Ulster citizens at the hands of the IRA mean little if anything to Westminster, but one would imagine that the murder of mainland citizens might mean something to Boris Johnston.

Such a notion is vain!

He has arrived here under the pretence of aiding Unionism resolve the ‘Protocol’ issue. BUT IN TRUTH, he is here to help destroy Ulster by pushing forward the agenda of Sinn Fein/IRA, the Alliance Party and the other gaggle of politicians who hate the Union with Great Britain.

Above all that, he has made it clear he is determined to have Northern Ireland further alienate itself from the God of Heaven by pressing for the establishing of abortion as demanded by those who care nothing for God’s law. The murder of the unborn child is the foulest crime imaginable and Boris Johnston is determined to have it legalised to the degree the pro-abortionist lobby in Northern Ireland desire.

There is little point in his railings against Russia and its atrocities against children in Ukraine, when he would promote that which, though more clinical, is just the same, here in Northern Ireland!

What an unmitigated hypocrite Boris Johnston is!

Here is the message he sends to Ulster on that matter in today’s ‘Belfast Telegraph’.

“We will intervene to ensure that women and girls have access to abortion services in Northern Ireland that are their legal right, following the failure of the Executive to deliver this.”

He would have himself seen as the promoter of child murder as well as all the other immoralities attached to his name.

What a judgment upon the United Kingdom is the premiership of Boris Johnston.

“And I will make drunk her princes, and her wise men, her captains, and her rulers, and her mighty men: and they shall sleep a perpetual sleep, and not wake, saith the King, whose name is the LORD of hosts,” Jeremiah 51:57.

This is most evidently, that time of rebellion and spiritual apostasy spoken of specifically in the second Psalm.

“Why do the heathen rage, and the people imagine a vain thing? The kings of the earth set themselves, and the rulers take counsel together, against the LORD, and against his anointed, saying, Let us break their bands asunder, and cast away their cords from us.,” Psalm 2:1-3.

Boris Johnston is here in Northern Ireland, seeking to set forward a breaking of God’s Law and and a casting of it away!

May it please the Lord to raise a voice of protest in Ulster’s ‘political court’ at this time!

You may add your name to a protest at: